Man, I hate to run. I like the idea, but I hate actually doing it. This is ironic since I come from a family of runners. I have started it again - finally - because I'm trying to lose about 5 lbs but as I was telling a friend, "Once those pounds are gone, I am done!" I have a love/hate relationship with that treadmill.

I guess I should be happy that our school's one fundraiser a year isn't selling anything, but instead that it's a run.  I love how excited these two have been for weeks in anticipation, wondering just how far their little legs could carry them.

The school wants the kids to get pledges, to collect money for how many laps they run. Since I am not comfortable at all soliciting money for something like this (or ever, for that matter), Spencer and I just make a small flat donation. And that way, we're not out big bucks when our little speed demons run way further than we thought they could (like Emma last year).

In true form, Emma left another note for us last night, and at the end asked if Spencer could come watch her run. So he moved things around, worked from home, and was even on a conference call during her race (yay for headphones). Tyler ran in the morning, when it was still cool. That kid was a maniac and didn't stop running for the entire 25 minutes! He ran 9 laps around that track (2+ miles), while Spencer and I watched in amazement. I even told him he could walk if he wanted but he looked at me like I was crazy and kicked it up a notch. 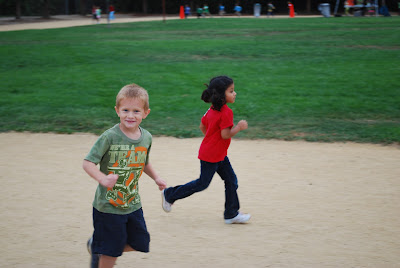 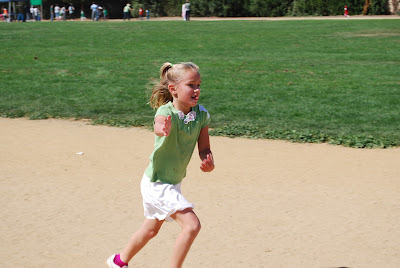 Emma ran in the afternoon. She was more concerned about high-fiving all the kids who lined up to watch, as well as talking to her friends, so she did 7 laps. Maybe I need to take them out running with me; the conversation would be interesting and I would be too embarrassed to stop early. And I just might enjoy it a little more.

Thanks kids; way to show me up.

Haha, they are better than me too I bet!

I loved it when my kids became old enough to go to the track with me.. though they really hated it. Jesse once said that he couldn't understand why I consider running to be fun....

Way to go getting back into running...i agree, I like to run when I am good shape, but HATE getting to that point! I love how Tyler just pushed hard till the end! What a stud!

This made me laugh on many levels... I love the idea of running too (would love to have a runner's body and energy level...) but have yet to actually love running. Everyone keeps telling me to stick with it ("You'll love it after mile 1 or mile 3 or blah blah blah") but I just don't. Oh well.

We had our "walk-a-thon" and instead of the small flat donation which we did last year, we decided to do $1/lap, since last year they did 12 to 14 laps. Wouldn't you know that Coleman went 36 laps?!?! Liv didn't do quite as many, but geez! I felt bad that I let the kids call their grandmas who also pledged $1/lap. We'll be going back to the flat donation next year, for sure :).

Uh, the SLC Marathon is coming up. And obviously Emma knows that if you stick your tongue out while you run, you look better and go faster.

That's why I love swimming! Don't have to feel the sweat or my actual weight on my joints when exercising. lol I too have a love/hate relationship with any treadmill (and running in general). Let's have a contest and see who would stop first!!! lolol It's always a reality check when my eight old niece can run faster miles than this old Aunt of hers. :-)