It amazes me how quickly morality is declining. There are things all over the news about this. I take it in with a lot of thought, but lately it seems I just can't get it off my mind. One of my YW last night was really distraught over something one of her friends told her. She is young, a Beehive, and I was interested to see how something as upsetting and sad to her was dismissed rather quickly by the older girls, only because they are used to it.

When Spencer was in Utah with some of his siblings, he saw that recent (potential) social/moral changes that are hard for us to swallow are extra hard for them. My own kids are going to become desensitized to things that would otherwise be shocking, I am starting to see. I want certain things to shock them, and I want them to stand for what is moral and for what is right instead of just shrugging their shoulders. Sometimes I wonder if I can shield them from such things, but I realize I can't do that. We can fortify our families in our homes. I remembered a talk by Elder Bednar and looked it up. I love his recommendations of how we can be more concerned at home:

1. Express Love--And Show It
I love this part:


"Sometimes in a sacrament meeting talk or testimony, we hear a statement like this: “I know I do not tell my spouse often enough how much I love her. Today I want her, my children, and all of you to know that I love her.”
Such an expression of love may be appropriate. But when I hear a statement like this, I squirm and silently exclaim that the spouse and children should not be hearing this apparently rare and private communication in public at church! Hopefully the children hear love expressed and see love demonstrated between their parents in the regular routine of daily living. If, however, the public statement of love at church is a bit surprising to the spouse or the children, then indeed there is a need to be more diligent and concerned at home."
Hmmm...I can do better at this.
2. Bear Testimony--And Live It
I need to do better at this too. But I often find that as we converse daily, I am able to carefully share bits and pieces of what I know is true and what is important to me. And my kids! They are so good! They do this daily with their friends - it blows my mind.
3. Be Consistent
This happens all too often in our home right now...
"Sometimes Sister Bednar and I wondered if our efforts to do these spiritually essential things were worthwhile. Now and then verses of scripture were read amid outbursts such as “He’s touching me!” “Make him stop looking at me!” “Mom, he’s breathing my air!” Sincere prayers occasionally were interrupted with giggling and poking. And with active, rambunctious boys, family home evening lessons did not always produce high levels of edification. At times Sister Bednar and I were exasperated because the righteous habits we worked so hard to foster did not seem to yield immediately the spiritual results we wanted and expected."
But I can tell you...watching Tanner hold his little Book of Mormon every morning - usually upside-down, with sleepy eyes, listening and sometimes repeating aloud, I can't help but think we are establishing something really important for these kids.
My kids may become de-sensitized to some crazy stuff because of where we live, but as long as they can recognize truth I hope it will be enough of a fortification.
I took this picture Sunday and I LOVE it. All of their faces are so perfect here. Love these stinkers. 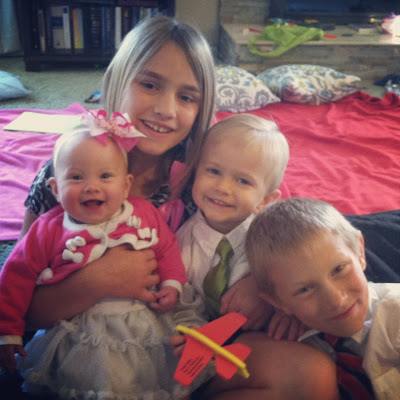 I wish I could blame this particular episode of I-need-to-change-my-house-ness on my 4 weeks of bed rest, but alas, this began right before that.

Rewind to September. Actually, rewind a really long time. We moved here 6 years ago next month and even though we rented this house first and I LOVED it, there were things I wasn't a fan of. The kitchen was the biggest, and we have since fixed that. The other was the fireplace. But no big deal. When we bought the house we considered taking it out. We never used it. The brick (stone?) was just awfully ugly. I had heard about whitewashing or painting over it, but I didn't think it would look good. And we finally decided to keep it - I have heard wood burning fireplaces are huge selling features.

We have a friend who is just so handy. We had him over one Sunday evening to give us an idea of how to spruce up our fireplace. Here it is; I didn't think to get a picture of the whole thing before demolotion and I am pretty sure I have old pictures of it but really don't want to go back through my files and look. That old hearth held many song and dance performances. But yuck. 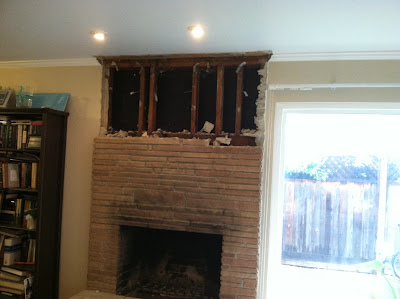 None of us realized just how much work it would entail but we decided to go for it. He emailed me about getting the new stone the day I went into the hospital in pre-term labor. It was all put on hold.

I got home from the hospital, on bed-rest, and decided I wanted to proceed. I hated that fireplace, and really, our main reason for this re-vamp was to utilize the space in our living room better. Our bedrooms are small and we wanted our living space to be bigger because our family is just growing. Fixing the fireplace up, flipping the couch around, mounting the TV and ultimately getting rid of the big entertainment center was going to free up some serious square footage.

It took Todd a while. He has three kids, manages apartments, and doesn't live near us. He brought some stone and marble samples to me because I couldn't go anywhere. The demolition started two weeks before our planned c-section date. I wondered if it would be done, but figured it wouldn't be. 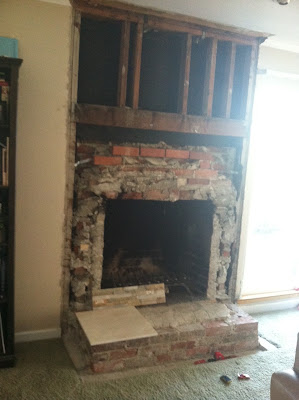 The demolition was disgusting. They found a rat's nest that was estimated to be 20 years old (gag), and lots of spiders, and there was a ton of empty space. So they had to rebuild the old insert with brick, which took extra time of course. And because Todd and his dad do such incredible work, they built the mantle. I was expecting a cute little "shelf"-type thing. Oh.my. I love the mantle. I could never have designed anything close to what they came up with. It took days to assemble and paint. It is a work of art.

They ended up working a lot while I was in the hospital, and wrapping it up when I was home. Alas, when Sadie hit 10 days old it was finished. The TV is mounted, there are NO WIRES showing (hooray for that), and I have a gorgeous mantle and new crown molding above. I could not be happier, and Todd didn't even charge us for the added square footage to our living room. 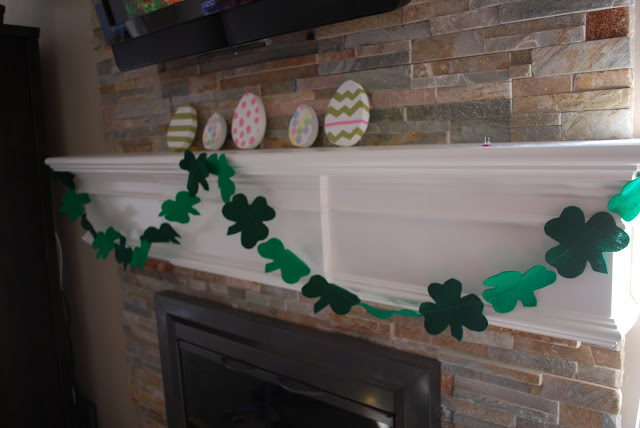 Oh! We made our first fire! And our second, and third. 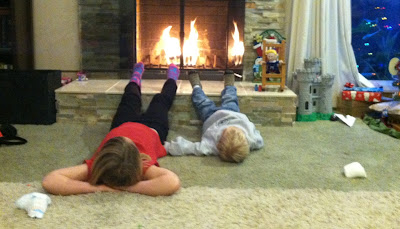 So happy we took this on. Timing was weird, but Spencer just makes fun of me because very often my timing is not ideal. Actually, it never is. 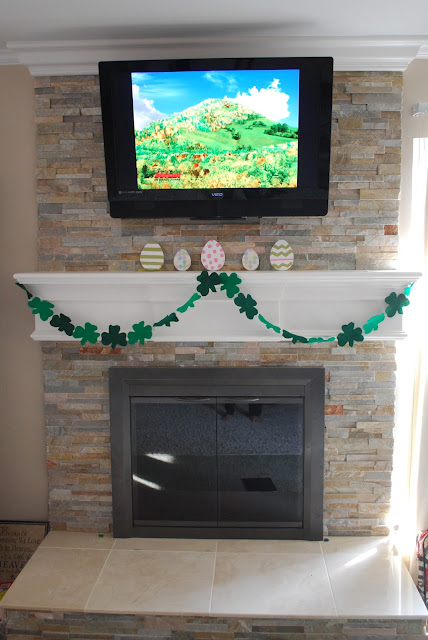 Can I say how fun it is to have one more flat space to decorate? (We won't discuss the crap that also collects there, including lego creations meant to stay out of little 2-year-old hands.)

Since my last post (and since my "thing" at the school is now over) I have been thinking a lot about my role and how I spend my time. One of my kids is really struggling right now. This child is having a hard time fitting in and making friends. It breaks my heart every night as I hear sobbing coming from the bedroom and as school is now a HUGE source of dread. This is the first issue I have had as a mom that I feel like I can't just "fix" myself. I know there is a lot more to come. But this is a hard reality for me. It is consuming my thoughts right now. We talk endlessly about how to make it better, and I feel like we never get anywhere.

My friend and neighbor reminded me of this talk after my last post. Some of these words go through my head constantly. I actually remember hearing this talk while Spencer and I were in Hawaii 5 1/2 years ago. It struck me and I recognized immediately the importance of these words. I remember thinking "Yes!" so many times. (And there was so much controversy about this talk! Why?!)

Yesterday as I was thinking about my kids, and specifically this one child, I felt like I need to carefully give as much time as possible to them (and especially this one). I need to eliminate a few more minor things to be completely present when they are home. Mothers who know do less is what I hear in my head all day long. Nevermind the fact that I don't really do extracurricular things right now, but I can do less of those things that are in-home distractions.

Maybe now that I have this down somewhere as public as my blog I can be accountable and do a little better. I want to be this kind of mom! I probably can't fix this issue going on right now with my child but I want this person to feel like I tried, and know that I care. And if I don't give it a little more effort it will probably end up breaking my heart.

This mom thing sure has a learning curve, doesn't it?