the one i know the least

It's been an emotional couple of weeks for me anyway, with some changes for our family. What perfect timing. Today Macie should have turned 3--my one literal angel, who I hardly know at all. I do know she must have a huge spirit and be completely selfless. I do know that she is special and that she quickly and quietly fulfilled all she needed to. I do know that our family is lucky enough to have a cheerleader on the other side. I can't imagine anything more comforting.

It's interesting how that first year after you lose a loved one every single thing is measured in months. The holidays are painful. Once that first year has gone by in its entirety, the load gets a little lighter. It gets slightly easier to go on. But then it's just different. We don't make it to the cemetery as often. I have other things/children to occupy my thoughts. Other people move on as well. Thank goodness for sweet moments of remembrance, especially for birthdays. I am so so thankful to my friends and family who took the time to let us know they were thinking of us. I have some incredible friends, and my house has the flowers/gifts to prove it.

Happy 3rd birthday sweet one. Thanks for joining our family. 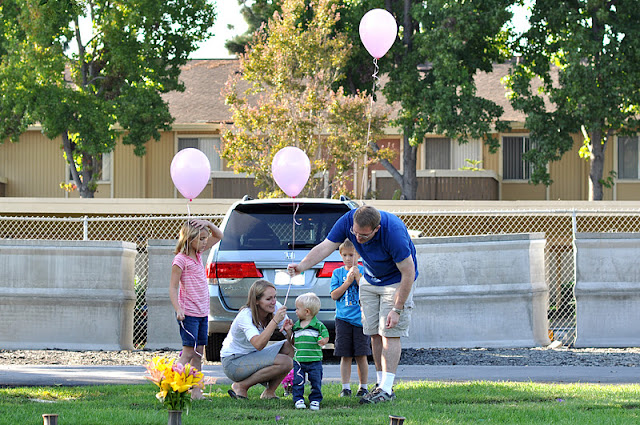 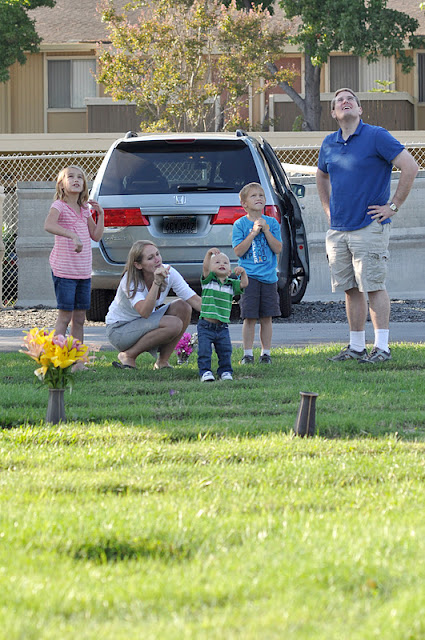 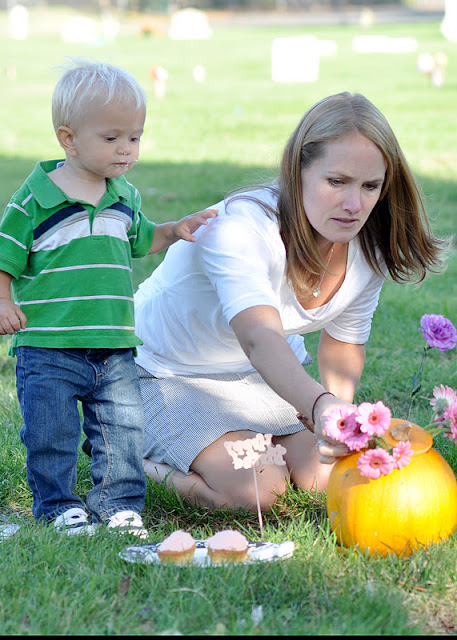 (notice Tanner's awesome cupcake face. and his cute hand on my shoulder. and that he's standing on her headstone...) 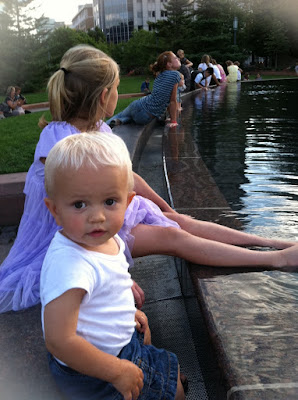 This kid is at the height of his busyness, at 15 months old. No one really cares about stats, let's be honest, but suffice it to say he is low for weight and high for head size which equals lots of falling on his face. And constant forehead bruises.

He brings me the Baby Bjorn all the time, whining to get in it.

He is obsessed with his dad. Obsessed!

He chased my grandparents' cat around (and dog) until it hissed at him and scared me. Unfortunately he wasn't too friendly to the humans in the house. 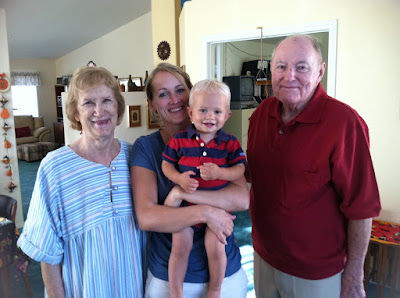 Is 22 pounds of cuteness. I still get stopped ALL.THE.TIME by random people who want to get a small piece of him.

Loves books like they are candy. Holy cow, we read a lot.

Likes to talk on the phone. He walks around the house, talking (blabbing) into it.

Says about 12 words at this point, but understands a heck of a lot more. One of his words is "Papa." 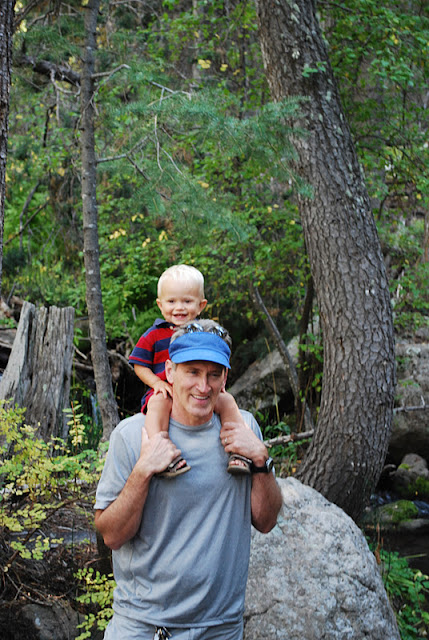 I love my little sidekick. Now if I could just get him to sleep through the night and nap more than an hour... 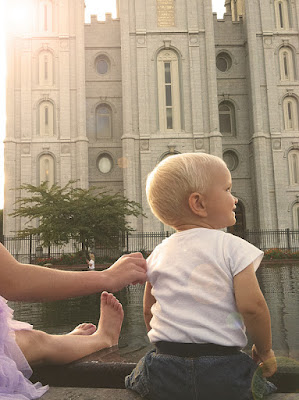 Do you know my Tyler? If not, you should. I adore this boy. I have adored him from the minute he was born, in all his red-hair glory. Our first 18 months together were rough but ever since then he has been easy as pie. 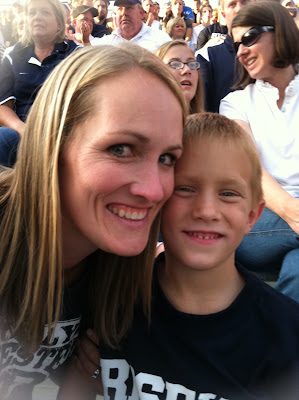 Tyler is incredibly sensitive...but at the same time he is also a leader. He is a rule follower and his greatest fear is disappointing people. I am trying to tweak this a little bit, as I want my kids to know they can make mistakes. Tyler does every single thing I ask him to, and often says "Got it!" when I tell him it's his turn to remove a dirty diaper from the house. It doesn't get better than that, and you would agree with me if you were around to smell the dirty diapers Tanner produces. 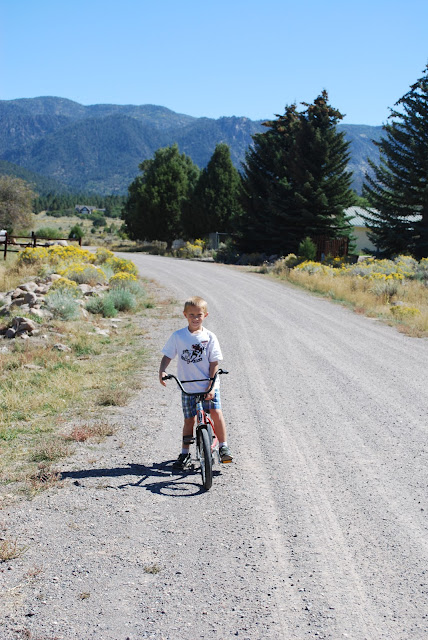 He was in his element in Pine Valley. He rode around on an old bike from the shed, got a new walking stick from great Grandpa, and showed us all how to find the best view of the valley while we were on our hike. And, because he's such a rules guy, he is incredibly cautious. I won't complain. Look how far he is from that fire. 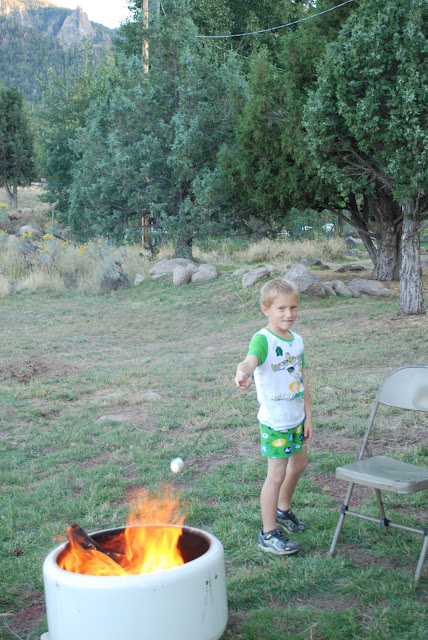 Tyler lost his very first tooth this week. And then he lost his second just 3 days later. He wasn't nervous at all once he realized it was super loose...he was just so thrilled with the prospect of a dollar showing up under his pillow. I got to pull both out for him (Spencer doesn't do blood) using floss and he was just so relaxed about the whole thing. So easy. So mellow. I love it. 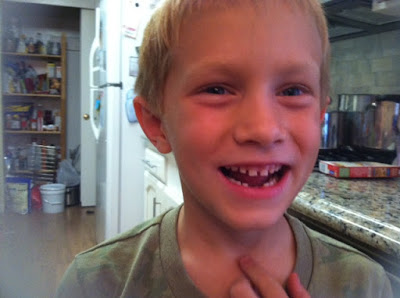 This boy is an athlete. I'm still not certain about his skills on team sports (t-ball) but he sure can run. Their annual Prowl at school was last week. Last year he ran more than any other kindergartner (9 laps--2 1/4 miles) and this year he was determined to do 10 laps. He ran his heart out, not stopping at all except to swig down some water real fast, but they blew the whistle right as he finished his 9th. I knew how determined he was to get 10 and felt sorry for him for a minute, but then I realized he didn't have quite as long as last year to run. And seriously - a 6 year old running 9 laps in 20 minutes? I don't know if I could even do that right now. I'm definitely taking him running with me. If I can keep up. 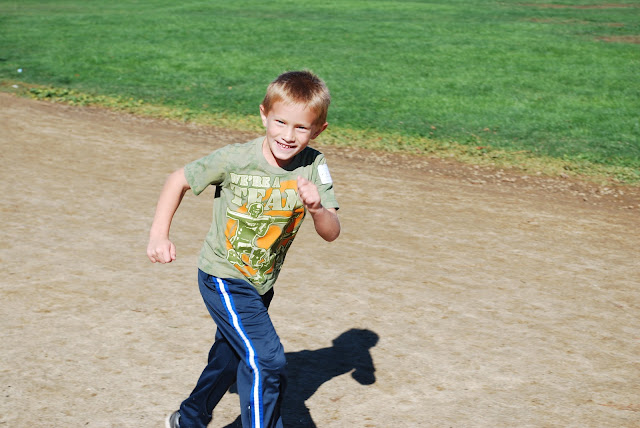 Everyone loves him, he is the easiest child to be in charge of, he is Tanner's new favorite chasing/wrestling playmate (when Tanner wants to snuggle or read he goes to me or Emma), and he's seriously a dream child. He doesn't complain, have tantrums or act like a brat. He isn't dramatic. And he loves to sleep! Um...can you imagine a better child? Yes, be jealous. :) I love this guy.

I sure enjoy this girl. Wasn't her post about Nashville so adorable? I should have her guest-post more often. When I told Spencer I wanted to take her with me he was worried that I wouldn't be getting a "break" from the kids. I assured him that having her would surely be a break, and it was. I have no complaints at all. I love that I can already take my daughter somewhere and feel like I have a friend with me.

We went to Utah for conference last week. She's a couple months shy of being 8 but we cheated and took her to conference anyway. I was thrilled with how excited she was by the thought of seeing the Prophet. While we had to sit up on the balcony (Spencer's first time up there, EVER - haha) she enjoyed taking it all in and experiencing it. 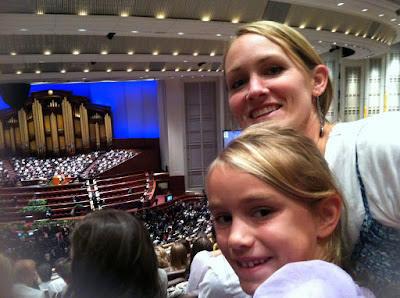 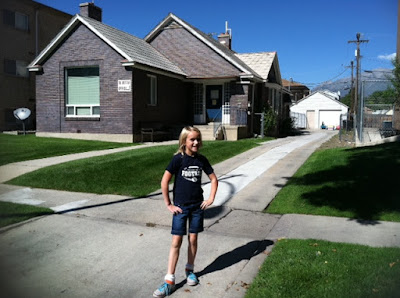 When we were in Provo I had her jump out as we drove past her very first home. Funny how it looks the exact same as it did 8 years ago. We have such fond memories of this basement apartment. Our rent was $360 a month, which made the shock of paying $1600 when we moved to Boston oh so painful. I loved that house; we had very few cares and she and I spent so much time playing, walking, and swimming. 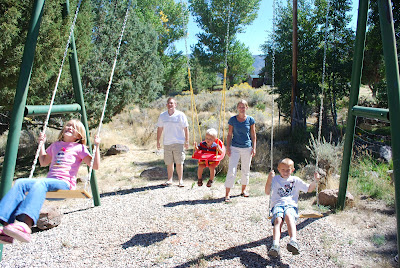 We also made a detour through Pine Valley. Emma's first time there was at 5 months old when Spencer and I were still at BYU. I wanted my kids to go there again, to be with my grandparents in their element and in their favorite place. I loved watching Emma play the exact same games with my grandma that I used to play with her. It was a wonderful 20 hours that we spent there, especially since my grandpa rocks the dutch oven. Yummm. 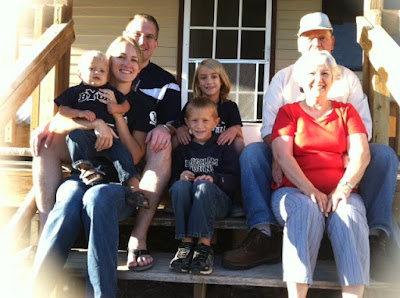 Emma reads to Tyler every night. Not only does she read to Tyler, but she reads to Tanner. Thank goodness for that, as he has suddenly developed an obsession with books. After reading what seems like 300 books to him during the day, I just can't do it anymore. Emma is always happy to oblige.

I thank my lucky stars every night that I have to make her put her books down and go to sleep at night. Some kids don't want to go to sleep for obnoxious reasons; I think Emma reading too much is a great problem to have. I love that I see that part of myself in her.

She asks me every so often if we can have another baby. Because of the pattern we've had, she's pretty sure it would be a girl, and she would have the opportunity to have a little sister. She's tried different ways to convince me, even trying to figure out a way for me to have a baby "like other people do." But to appease herself, she has taken a liking to dressing Tanner up in one of her t-shirts, tying it with a sash so it looks like a dress, and putting a flower in his hair. I guess I will sacrifice Tanner's future pride if it makes her feel better...

I thank my lucky stars for this girl.

October is a strange month for me. Historically it is really busy. It is Halloween - perhaps the least sentimental holiday out there. But it's also Macie's birthday.

After not thinking about her a whole lot in what seems like WAY too long, I have thought about her a lot during the last week. I guess I attribute that to General Conference (LOVED several of the talks but 2 in particular), the fact that she would be 3 soon, and the fact that I have had several opportunities to talk about her. I'm glad it's fresh in my mind again. I noticed that the first year after she died was so hard because I was always thinking in terms of "This would be her first Christmas/It's been ___ months since she died/etc." Now that we are past that there are other things that make it hard. Hearing people complain about being pregnant stings a little bit, even though everyone does it. Not thinking about Macie as much makes me feel guilty. It's a different struggle now than it was before. But it's still hard.

SO. In honor of Macie and of my other kids, I will do "mom blog" posts all October long. This is going to be for me, to remind me once again of how much I love what I do, and how happy my kids make me - ALL of them. (I'm writing this as Tanner is screaming in his crib and won't sleep.) All about them. You may find it boring - fair warning.