We decided to do our very own Thanksgiving this year. Maybe it is a fault of mine that I am selfish and like my little family all to myself. Maybe. We were going to do the whole week in the motorhome but because we tried to plan this little vacation just a month previous, RV parks were totally booked. So we did 2 days/nights in the motorhome and then 3 days/nights at a friend's house. That was perfect if you ask me.

You may remember that we have Spencer's parents' motorhome for the year. One place we have wanted to go for a while is Pinnacles. Very few people have heard of it but the things we have heard caught our interest. We knew it was primitive and in the middle of nowhere but we went for it anyway. This leg of our trip coincided with our 9th anniversary. Thankfully, I'm not an obsessive romantic and was totally fine camping in a motorhome with my family on our anniversary. 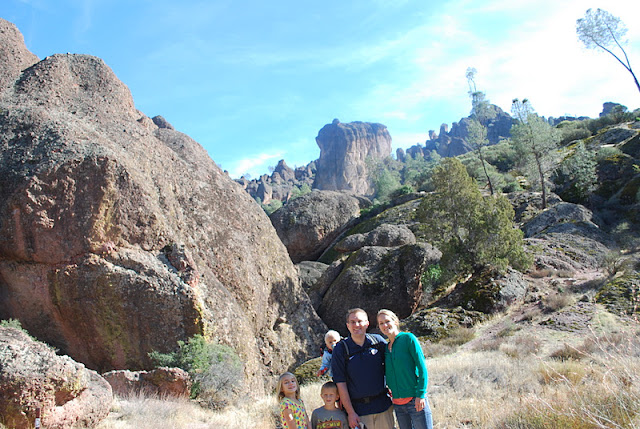 On Tuesday morning we were going to pack up the motorhome and drive to the trailhead for a 6 mile hike to some of the caves. Funny - I was worried about the kids being able to walk that far. Well, for some reason the motorhome's battery was completely dead. The extra battery didn't fit. The slow charger was charging it too slow. We tried to make lemonade out of lemons (or maybe it was actually the opposite), and decided to walk from the campground, adding 4 additional miles. A few things saved us and made this crazy insane hike possible: 1) It was rather elevation-neutral - we only climbed about 300 feet so it was more of a walk than a hike. 2) It was perfect weather. 67 degrees made it so completely bearable and not hot. 3) My kids aren't big whiners (ok, Tanner totally is but he doesn't really count since he was in the backpack). It took us almost 3 hours to hike to the caves, but they sure were cool. I guess I was expecting to walk through the caves but it was more like scurrying up cold, wet rocks and through crevices in the pitch black. It was awesome, especially when the cold water dripped down my back and pants. :) 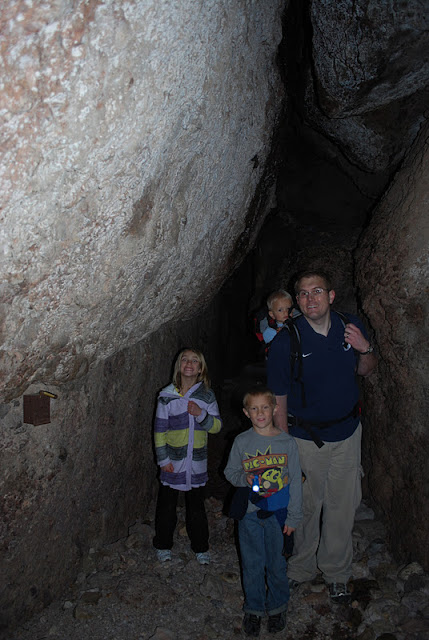 The last two miles were pretty awful - we were all dead on our feet and the kids were dragging. Emma and I were 10 minutes behind the boys because we had to make a bathroom stop and when we dragged our sorry selves into that campground and saw the motorhome actually running I could have cried. We cooked a frozen lasagne, laughed about how far we had walked, and all went to bed early. 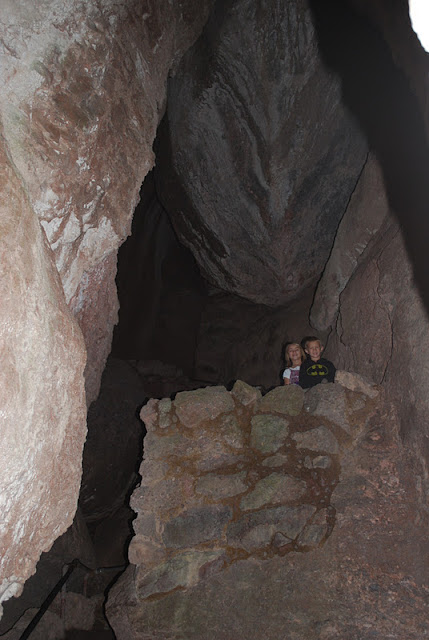 The next day we hiked a relatively easy 4 miles to the other set of caves. These caves were longer/bigger and a little more easy to get through. The views were very cool, but we never saw any condors like we expected (but we did see wild turkeys, a wild pig, and 3 deer!). We packed up and started driving for the second half of our vacation. 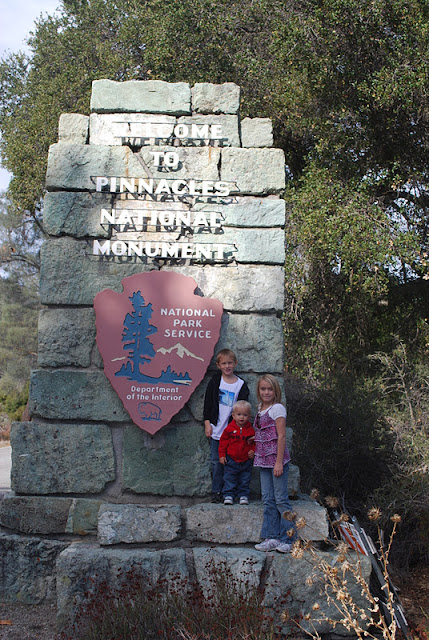 Spencer works with a nice girl whose parents have a second home in Pismo Beach. I had never been so we decided to take them up on their incredibly generous offer to stay there (while they were in Hawaii!). The house was amazing...it is the 5th oldest home in the city but they recently bought it and restored most of it. It was a 10 minute walk to the pier and downtown shopping/restaurants and we had brought our bikes so we used them as our main form of transportation. Good thing too, with how we ate! I had the best panini of my life at a little pasta restaurant, and then had the best clam chowder of my life two nights later. We saw the Muppet movie, watched lots of other movies, and relaxed. We invited some friends to come spend the day with us on Friday and hung out at the beach, digging, swimming, and trying to ride these beach bikes. And of course Ticket to Ride was involved. 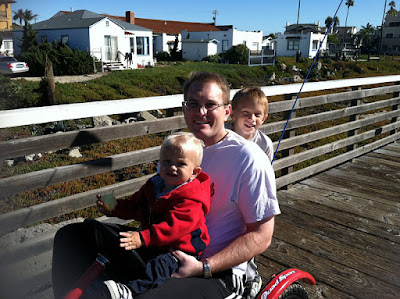 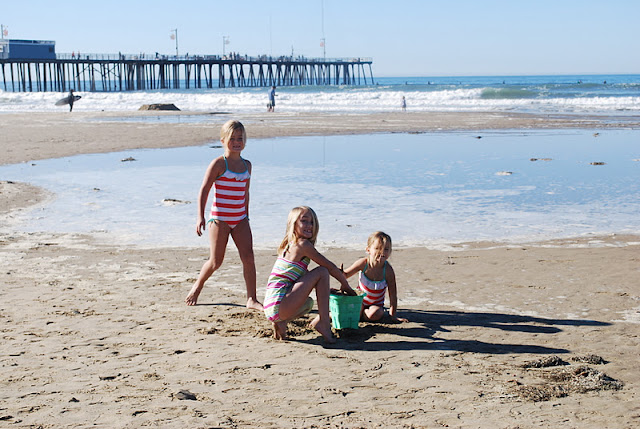 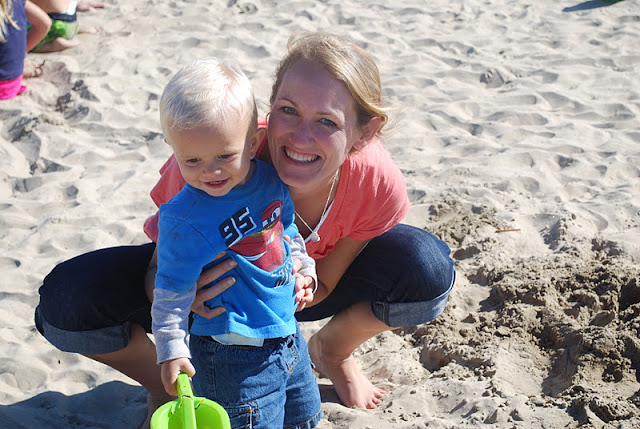 Our vacations aren't always super fun vacations since most of them end up being "trips" with no relaxation involved whatsoever. I can't decide what my favorite part was, but watching my boys dig in the sand for hours on end and being so tired at the end of our hike (limping in step with Emma) definitely top the list. A real thankful Thanksgiving break. 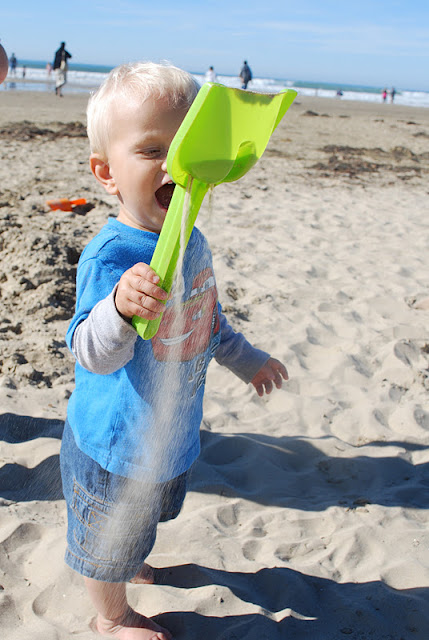 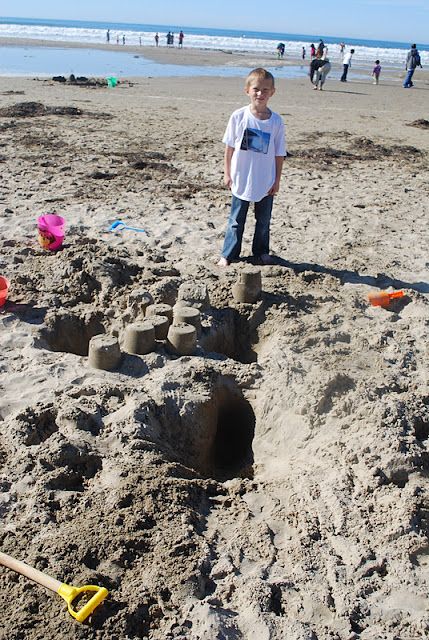 I know the internet is all abuzz with Pinterest right now...but I'm going to tell you why I like it so much.

I heard about it a year ago and eventually had to request a login since I didn't know anyone who was already on it. After a while my invite arrived and it took me another few weeks to figure it all out. I love the great ideas, how it gets the creativity flowing, seeing what my friends like (and what they make!), etc. Oh, and how I can browse it on my phone when I'm at a red light. That is, perhaps, the best part.

But! My kids are also fascinated by it. Emma desperately wants her own Pinterest account. I have found that if I tell my kids that what we are having for dinner is something I found on Pinterest, they are a lot more likely to be excited about it. Spencer is the same way; he walked past the computer when I had a certain dish pulled up and he commented that it looked really good. Wham - that became his birthday dinner 3 days later!

I made this last night (broccoli chicken braid). I made my own whole wheat dough instead of using crescent rolls as a modification. Anyway, Tyler thought he had died and gone to heaven. And there are two cups of broccoli in it! He asked for more, twice, and then asked me to pack the leftovers in his lunch today (ew). Emma wasn't as in love, but according to her, if something is on Pinterest it must be good. So clearly the problem is hers.

I love that I can easily type in things I'm looking for and suddenly have hundreds of options. I love that it seems to be a mind-reader. Mostly, I love that my kids can now type in things they are looking for (crafts) and get great ideas. So aside from them eating more healthy, and being happy about it, it's just plain fun for all of us.

Yes, I realize we were just here... 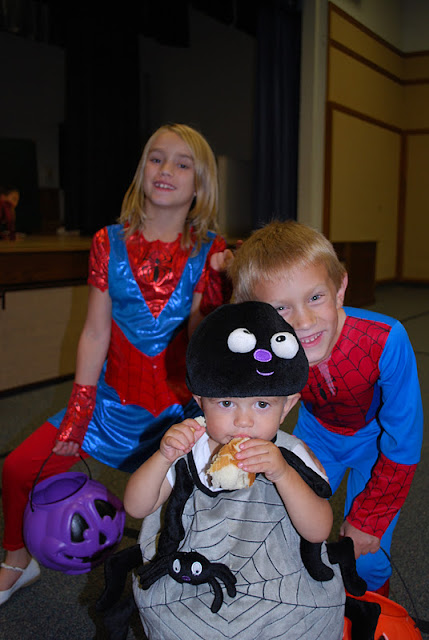 So...I decided to add to my Christmas craft/decor collection! I was walking the kids to school last week and went past a neighbor's JUNK/trash pile. I saw lots of these Christmas lights (harder to find these days) and even though they looked awful I gathered as many as I could fit into the stroller. I spray painted them all silver and then bought 3 colors of glitter to decorate them. This wanna-be apothecary jar I made myself with $3 of materials from the thrift store - a glass bowl and a shot glass glass for the base (Emma asked me if people do bad things with those...). 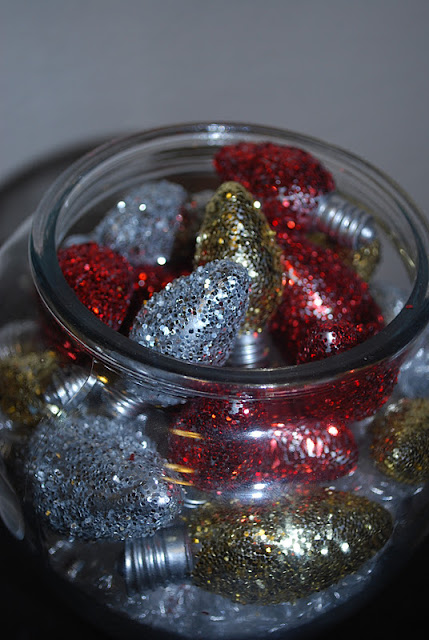 And, I made a felt rosette Christmas tree and white wreath. The Christmas tree took forever but I really like how it looks. I used about 180 white circles, added some cranberries at the top and bottom, plopped it onto a candlestick and voila. Easy and cute. 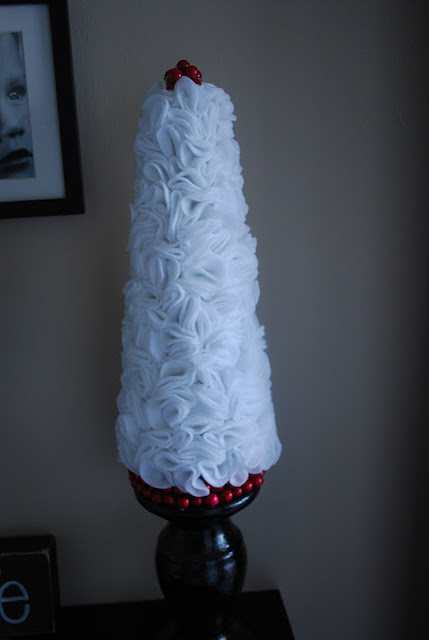 And here is how Tanner spends a large part of his day. Even though he only naps for 47 minutes, I sure treasure that time. Man, I love this boy. Maybe he just isn't a sweater vest kind of person? 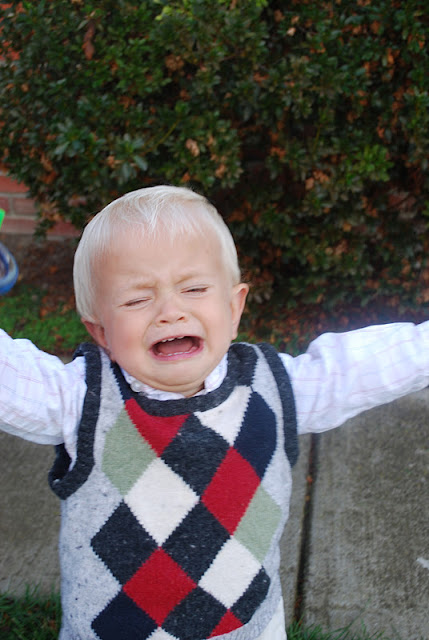 While I was at it I decided to just take care of something that's been bothering me for about a year. My entryway is really dark, as a result of almost no natural light. When we moved in I decided to paint the wall burgundy. I really liked it but lately it's made the entry seem even darker. So, on a whim (and without telling Spencer, which, believe me, was SMART), I chose the paint and dragged Tanner to the hardware store. While he ooo'd and ahhh'd over the 14 foot inflatable Santa Claus I got the materials and then painted it during his 47 minute nap that afternoon.

Here it was before (missing the mirror)... 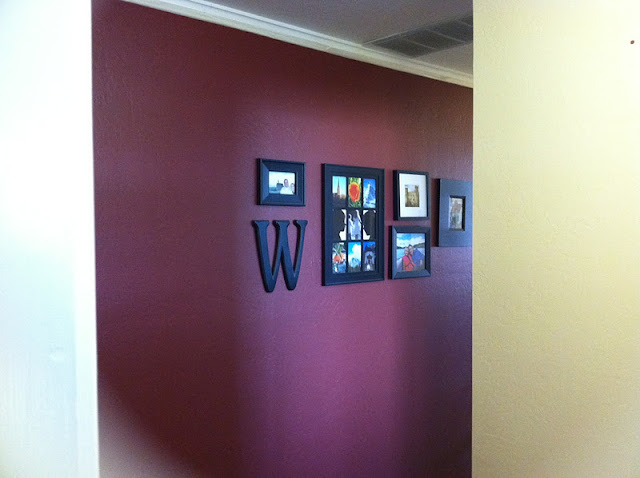 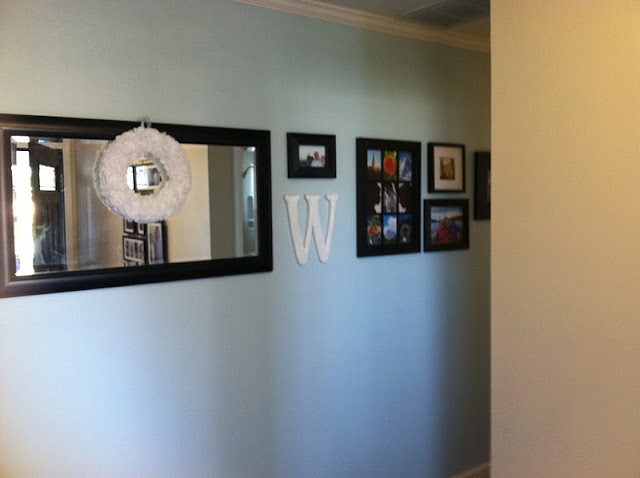 I don't know if this is the exact color I was going for but I'm happy (and there's the white wreath I just made...).

I hope the desire to re-decorate is out of my system for another few months because now I have a bunch of stuff to do around the house... and I'm sick of Spencer calling me Martha.