In honor of the Cougars making it to the Sweet 16...

There is something so familiar, so comforting about going to Provo. Everything there has a memory for me. I only lived there for 4 1/2 years but those were some of my favorite years. I started college, I hiked the Y all the time, I figured out who I was, I learned that college was hard stuff, and I learned a lot about real life. I met Spencer there, was an EFY counselor there, graduated from college, and had my first baby there. It was the hardest and the best of times. I rubbed shoulders with the cream of the crop. We all (almost all) lived the Honor Code with pride. Provo consumes you; there is nothing quite like it. I felt euphoric as we walked around. Even the smell of the hand soap on campus took me back.

The chance to go came up last week, and aside from leaving two of my kids behind we were thrilled. It was a quick recruiting trip, just 36 hours, but we managed to eat all my favorites - Cafe Rio, Texas Roadhouse, Magleby's, Brick Oven and BYU bookstore chocolate covered cinnamon bears. I got to see some old friends (but not all of them, darn it), some former YW, and some family. 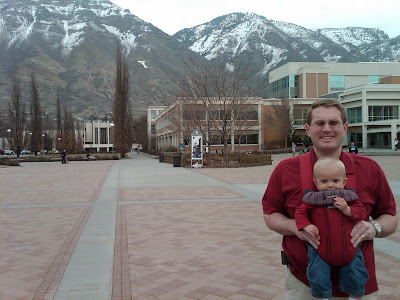 I got only one picture, with a cell phone nonetheless, and Spencer doesn't look too great with his eyes closed. And don't mind the color they're wearing. But our cute little guy, even though he won't remember, got to join his parents at the place where they met. (If we'd been really sappy and specific we would have gone to the SWKT auditorium.)

I love Provo. I love BYU.

Tanner has now been outside of me as long as he was inside of me, give or take a few days. And I can finally say that I'm sorta figuring this child out. Hooray for that. We spend a lot of time each day looking at each other (it isn't enough to be next to me; he must be on my lap or in my arms). As a result, I sure love his face. Now that he can sit, I plop him facing me and we make each other laugh a ton. His dimples melt my heart.

Tanner is a good conversation piece. Really. I can't say how many times I get stopped anytime I go anywhere, by people wanting to talk to him and tell me just how cute he is. I think all my babies have been very cute, but with him there's something else. I think it's the darling cheeks and dimples - they just scream BABY, and everyone loves it. However, today a nice Scottish man and a grocery bagger both told me it's his eyes that make him so beautiful. I can't make it through Costco without at least 3 or 4 people making comments about him. 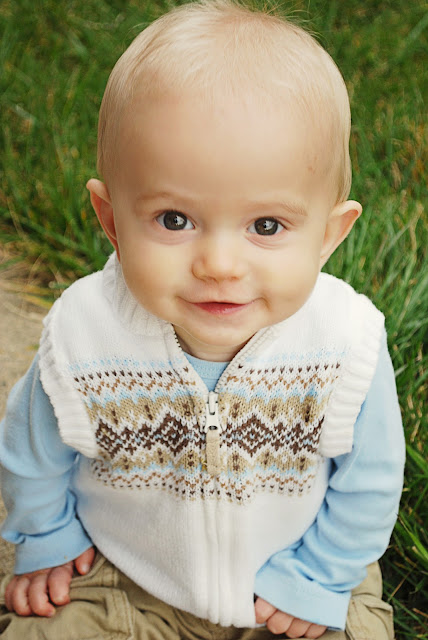 He is full of personality. Most of the time I am just so grateful to have an energetic, playful baby. He loves peek-a-boo, loves singing every baby song I can think of, loves nursery rhymes, etc. He still smiles with his whole body. His laugh is adorable.

I never though I'd say it but I'm sad he's growing up. He's been so hard and so needy since day 1 but at the same time it is so satisfying to know I've given him everything he needs, and wants. :)

This kid loves his dad. Both Emma and Tyler went through stages as babies where they "forgot" Spencer because they would only see him on Sundays. Tanner only sees him for a few minutes in the mornings (and on Sundays a little bit) but he leaps out of my arms to go to him. This morning Spencer took him for a minute before walking out the door and Tanner looked pleased as punch. I put my arms out to take him back and he leaned away from me. Wow! So that's what it feels like! I love that he loves his dad. Now only if they could love each other in the middle of the night, and leave me out of it completely... 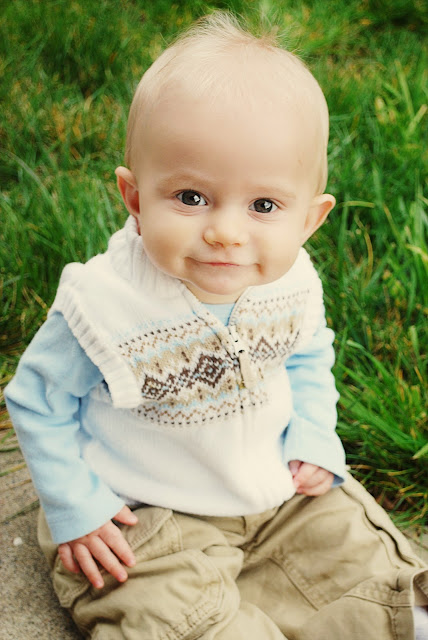 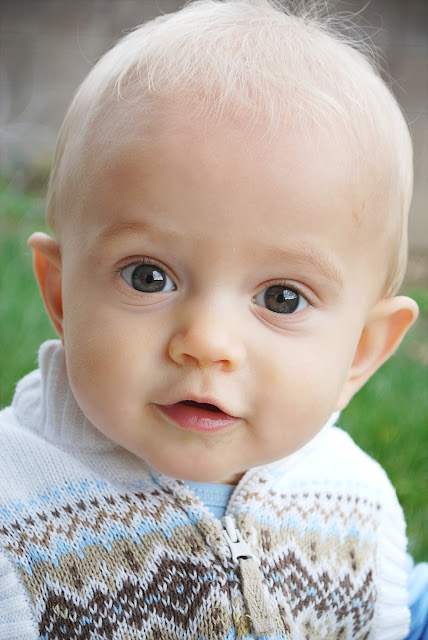 I don't know why I get a certain amount of satisfaction from the fact that Spencer is still learning things about me, even though we've known each other for almost 10 years. I really don't feel like I'm mysterious. But anyway...

So we have once again found ourselves in the craziness of tax season. Perhaps the fact that Spencer isn't home much, combined with the fact that it's cold and we're inside a lot, was making me a bit stir crazy. Add that to my sudden love for HGTV and he had to know something was coming. I never "nest" when I'm pregnant. I "nest" when life is full of stress. Spencer knew I was literally itching to do a project. He kept saying, "I can help you! Just give me a few weeks, and then we can do it together!" But he was totally missing the point. I had to do it on my own. I guess it's my outlet. I think women will understand this, and men might be baffled just like he was.

I've learned something about myself these last few months. I really like being in my bedroom. I like the coziness of it, being able to sit on a bed instead of on the couch where it's crazy and the kids do their homework and build Lego creations. My room might be teeny tiny, but I really like to be in there. As I've been in there a lot lately (feeding Tanner, folding laundry, etc.), I realized I wanted to change it. Don't get me wrong, I loved my room. Here is what it looked like from the day we moved in until just yesterday: 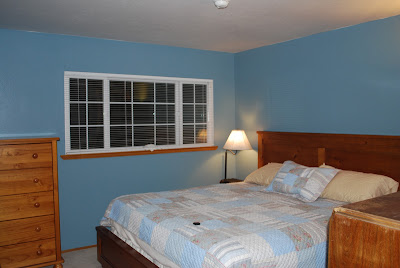 I painted it, along with two friends, this blue color, and I really did like it. And I still liked it even when I decided to be done with it. The blue was just too specific, and I needed to change my bedding (more on that later), and because it was so blue, it wasn't going to match at all.

So, because I lose my mind slightly every tax season, I decided to totally re-do my bedroom. That was going to be my project - my outlet. To prove how crazy I am, I even toyed with the idea of painting my bed! I'm glad I sort of came to my senses...

I found a great bedding set that I loved online at Macy's for $250. Yeah right. 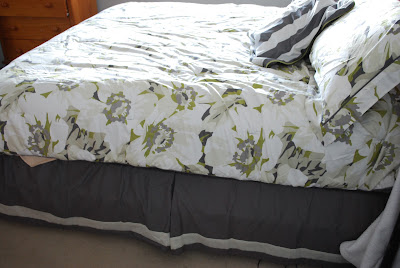 So, I went and found it (also new) on ebay for $60. I won that auction, and instantly had a color scheme. I headed off to the hardware store to look at paint samples. It was my lucky day because their section of "oops" paint had exactly what I was looking for. I can't think of much that is better than a $5 gallon of Benjamin Moore paint, in exactly the right color.

At this point I decided to go all out and even order a print for a frame I've had for a long time. Did you know you can order prints from Costco? Pictures from a gallery of 20,000? Because my bedding had poppies in it (but not a whole lot of color), I found a picture of pink poppies, and I think it complements the room nicely. (Now to decide where to put it - above the bed or on another wall? Ideas? It's much bigger than it looks.) 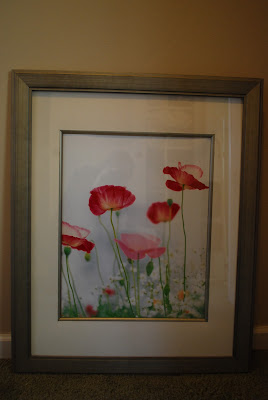 I found a clearanced pillowtop mattress pad for $20. And lastly, the sheets we've had since before we got married finally got a hole in them (and my back-up set is pretty thrashed as well), so I ordered new sheets. As a sidenote, Spencer admitted to me two weeks ago that he has been completely converted to my insistence of buying high thread-count sheets. Thank you very much; that is music to my ears.

I had all my supplies for an entirely new room, and they all just sat in my laundry room while I waited for my opportunity to paint. It's hard to move furniture all by yourself, and Spencer rarely has any extra minutes to help me do that part. I finally talked him into helping me shimmy the bed out 2 feet from the wall, so I was able to paint that wall last Saturday while he was at work and while the big kids were home to help me with Tanner. As I didn't want it to turn into a weeks-long project, I decided to power through and paint the remaining 3 walls two days later (yesterday).

I baby-sat two girls in the morning, had to go to the school 3 times, had to deal with a baby, did the laundry, edited a paper AND painted the rest of the room! I had to move the dressers out by myself but doing it carefully and slowly was ok. And, even though I finished at 11 pm and Tanner was up shortly after, I love love love how it turned out. This lighter gray color (with a slight hint of lavender) matches the bedding, is very neutral, and also makes my little room feel just a little bigger. 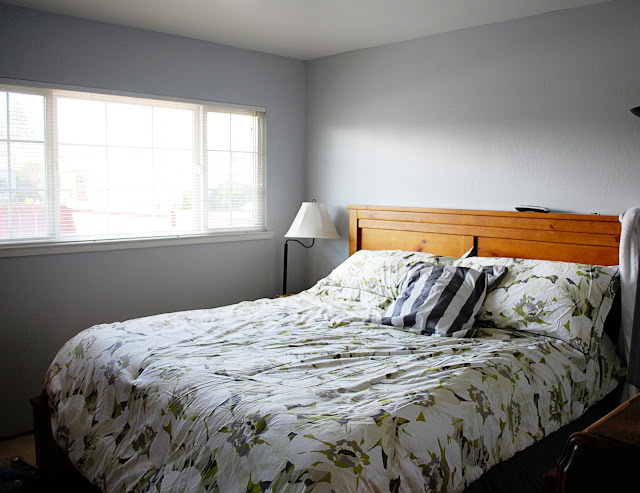 Last night as I was peeling the tape off the ceiling (when he got home at 10:30) I said to Spencer, "I love it! And I'm not going to paint this room again." He instantly said, "I don't believe that for a second." I'm serious though. I just need to find a new project for this summer when he's really busy again so that his crazy work life doesn't consume mine.