What I'm lovin':
*Immobility. Tanner STILL doesn't roll over. Strange, but it doesn't concern me. Why? Tyler NEVER rolled over. He just wasn't interested. I think Tanner is the same. Also, he is almost never down on the ground because he throws a complete fit, so I guess he just doesn't get practice. Fine by me; less baby-proofing to worry about. However, I can't wait for him to start crawling. Maybe he will follow me around and not insist on being held.
*Crazy weather. A few weeks ago it might as well have been summer, and now they are predicting SNOW here. What?! Never boring.
*Emma wanting to sleep in the boys' room. She is in a phase where she doesn't want to be alone. So, she's taken up to bunking in the bunk. Seeing all three of my kids sleeping in one small space makes my heart feel like it might explode (that is, if they actually are all sleeping....).
*On that same note, my big kids asking if they can "have Tanner" while they are playing. I love getting a few minutes of freedom, and enjoy seeing Tanner play with something girly while being the complete center of attention. The center of someone else's attention. Heaven.
*HGTV. I used to watch Fox News during my free time (meaning, baby-feeding time), and I just got plain sick of the news. Now I know exactly how to fix all the things in my house that need fixing, and I have a serious itch to do projects. Perhaps I should become an interior designer, because I think I've seen every episode of every show. I now say "window treatments" instead of "curtains" and "space" instead of "room." The best part? Tyler and Emma love it as much as I do. They're the ones who encouraged me to keep entering the dream home giveaway, for the home in Vermont. :)
*The Wii. We only let the kids play on Fridays after school and on Saturdays. And the little lovelies don't complain about it at all! It's still new and exciting to them. It saves me with Spencer working 80 hours a week and being gone on Saturdays. Did you know redbox rents out Wii games? Love that too.
*SORE leg muscles. Why is it so fiercely satisfying to be sore? Maybe because it means I'm finally using them? I'm hoping to say goodbye to the jello soon enough (I just blame 4 pregnancies, but still...time's up).
*My YW. They're so awesome. I am SO going to miss the ones heading to college this fall.
*Spencer being able to balance everything. He spends a few quality minutes with the kids in the morning. He leaves work at 9:30 at night, sometimes heads to the church to take care of a few things, and makes it home in a good mood, just in time to go to bed. Unbelievable. I don't know how he does it, but I love that he does it.
(I won't go into all the things I'm NOT loving, like repeated strep/mastitis, lots of rain, the fact that peace signs seem to be on every piece of children's clothing, and a cute stinker baby who has made it his little life's mission to be sure his mom doesn't ever sleep more than 3 hours at a time.)

Two things:
1. The few times Spencer has had to discipline Emma, it has completely devastated her. She gets really embarrassed and it takes her a long time to recover from it. Whenever I discipline her, she is sad for a minute and then gets over it. This doesn't happen much with her because she's pretty darn good, almost all the time.
2. A couple months ago I bought Tyler some new pajamas. His were all too small or not great for the colder weather. I chose the Star Wars Legos ones. Tyler loved them. When Spencer got home from work that night, right before the kids went to bed, he saw Tyler's pajamas and they instantly--almost as if prompted--started pretend fighting with light sabers. Sound effects were included. It was one of those moments when I didn't quite "get" it, but it did make me smile. And I got to thinking.

I have gradually realized something in the last year or so, about how my kids respond to different things. Since I am the one with them all the time, if they need to be disciplined I would much rather it be from me, handled right away. This is effective; as they are still quite innocent and don't get in trouble often it's not a big deal. They really are good, and they rarely fight with each other or with other people.

When Spencer gets home they see it as play time; and he does too, apparently. I want it to always be that way, especially since he often has long hours at work (like right now). When he gets home, I want all of them to be happy to see each other. So, I have made the decision to handle that lame part of parenting - disciplining - by myself when possible. Obviously this won't always work or be wise, depending on the situation, but I would rather be the "bad guy" for a few minutes, and then we can all get over it and have fun again, and have Spencer get to come home and not have to discipline or be the "bad guy." And I certainly never want them to be scared of him. With all that he does, I think he deserves to be the "good guy" as much as possible.

About a month ago I really started itching to do crafts, or to just find a project. It had been a while. There was this heart wreath I really wanted to make last year but never got around to doing so I enlisted some friends and we invited others to come join us for a day (that turned into two) of crafting. I adore this wreath. 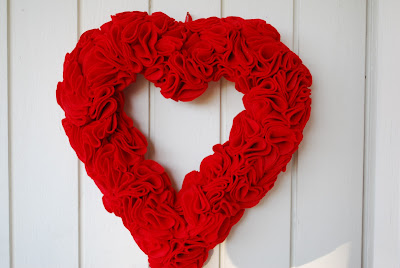 Jonna had found a cute project so we also made these letters. Mine are still waiting to be drilled and embellished...I'm hoping to get around to it before I have to put them away... 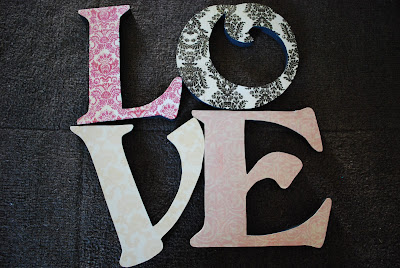 And because I was just on a roll with Valentine's decor, and because this one involved very little effort, I downloaded this adorable piece of Valentine's art, had it printed at Costco for $1.49, popped it into a frame (that I ended up needing to paint black since it was brown), and it's now on my entry table. Easy. 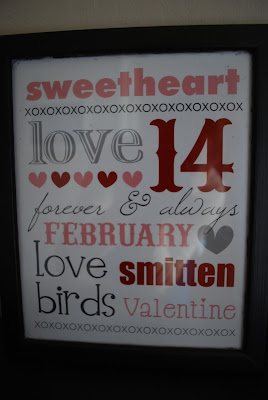 So, instead of having 2 Valentines decorations, I now have 5!

Lastly, we have been using the same laundry hamper bags for the last 5 years. They've just gotten older and less usable, and this week one totally ripped... I like them though because it's easy to separate whites and darks (my kids have been doing it for years) and not have to worry about it later.

The only other laundry hamper I have seen that I LOVE is $90, so I decided to make new "bags" to be held to the metal stands. I pulled out and dusted off my sewing machine, picked up some fabric at JoAnn ($8), and attempted to figure out what the heck I was doing. There was definitely a lot of error, but they ended up really cute! Even my kids are impressed. I thought a broken needle might have been the end of my big sewing project but thanks to some friends who probably thought I was completely inept, I learned how to replace a sewing needle - which is so easy it's embarrassing that I had never done it before. Note to self: Broken needle does NOT mean broken sewing machine. 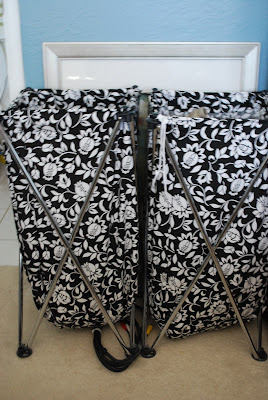 No, they don't match my room AT ALL, but I'm hoping to change that real soon (another project for when I have a bit more time). Maybe these cute laundry bags will make me like doing laundry more. Ha ha. At least they're fun - what an improvement from the boring white ones that were here for 5 years.

And...lastly, here are some festive cookies. My mom has THE best sugar cookie recipe. She doesn't really use a recipe but I nailed her down a few years ago and got an approximate recipe. I made these for my YW a few weeks ago when our lesson was on finding an eternal companion, which was fitting for that and for Valentine's. 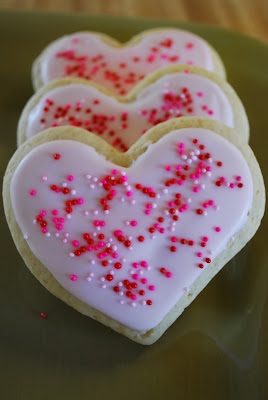 Glad to be back in it! Now to pick up a book and actually read for pleasure - that's my next goal. I can't fathom it but it sure sounds appetizing... 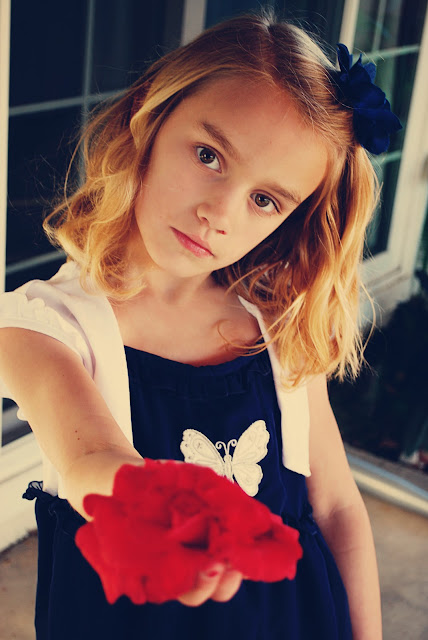 We think the world of this girl. I swear Spencer sprouts a few more gray hairs every single year, and he's told me many times he's worried about being the dad of such a beautiful girl, especially a few years down the road. My favorite things about Emma are that she has a kind heart, she's very aware of those around her, and their feelings, she cries with me when she sees I'm sad, she is the best big sister these two stinker boys could ask for (and someday they'll realize it!), she holds Tanner when I just can't do it anymore, she's a good friend, she does everything I ask her to, and she makes me proud every single day. Oh, and she now leaves notes outside my door with lines for me to respond - she's always good at asking me a question so I know exactly what to respond to. I'm so glad she came first because if one of her brothers had been first I don't know if there would have been any more. 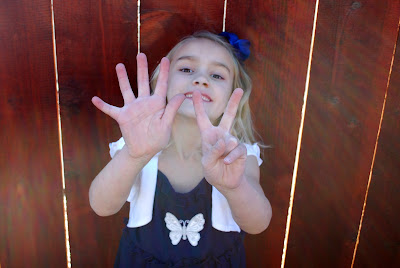 We only do birthday parties every ~3 years. My kids have never complained about this, and I love them for it. When they DO have a party it sure is a big deal. And, I don't have to worry about spoiling them. Emma decided on a Wii party and of course had to invite two boys from school, in addition to a few girls. It's so great when your kids can decide what they want, but are also conscious of what their moms can handle. :) So, that party is this afternoon. Now if I can just figure out how to get all the Wii remotes connected, make a cake, clean my house, and take care of a super needy baby, we'll be good to go! Let's party!