Three days before Macie died I did some girly vinyl projects. I put up pink vinyl in her room (I honestly can't remember the cute quote I used, but I know it was from one of the Disney movies), and then painted a wooden sign light light green and put some more pink vinyl on that.

The sign said "Daughter of God." I didn't love how it turned out - the letters weren't spaced evenly and to me it just looked amateur-ish. The font wasn't my favorite. I still had two weeks until she was to be born, so I put it aside to worry about (or fix) later.

Days later, as we were planning her funeral I knew I wanted the pink blanket my mom had made for her to be displayed over the casket. Spencer also suggested displaying the sign. I was embarrassed about it - it had too many flaws. But he persisted. I had made it for her, and he thought it was the perfect touch, flaws and all.

And so it was there. At the cemetery. Right under the beautiful blanket, leaning against the casket.

A few months later one of my friends made a comment to me about the sign. I remember cringing for a minute, remembering that I was embarrassed of what it looked like. But she got teary as she expressed to me how much she appreciated that statement. She has 3 daughters herself, and told me what an impression that little wooden and vinyl sign had on her that October day. She said that every girl should have a reminder like that.

Last week I was moving out some of Tanner's too-small clothes and at the bottom of the 3rd drawer in the dresser was that little sign. I honestly don't know why I put it away in a drawer - I have a sweet daughter who would surely benefit from having that up in her room right now. Who cares if the letters aren't perfectly straight? What better message could she read every single day? After all, don't we all have flaws and imperfections? Ever since I saw that sign in there (and it's still in there, I admit it), I've been thinking about the importance of those words. I work with the teenage girls at church. Sometimes I wonder if they know how loved and how special they are. If they could always truly feel and know they were daughters of God, I am certain they would be even more magnificent.

I plan to hang the sign somewhere soon. Somewhere in Emma's room. Where it belongs.

my sidekick, at 6 months

I definitely never said that I wanted to freeze time in Tanner's first 3 months. I love holding newborn babies...I just don't like having newborn babies. After that, bring it on. That being said, I can't believe we're at 6 months already. SUCH a fun age. This is exactly where I would freeze time.

Tanner still confuses me; I figured my other kids out pretty well by about 3-4 months but he still manages to elude me every single day. He has absolutely no schedule - which drives me crazy - and almost everything about him is inconsistent. Use your imagination.

His eyes won't choose a color. We have two browns and two blues and Tanner's are exactly in the middle. Who said genetic blending doesn't happen?

He technically sleeps through the night, but my other kids really slept through the night by 3 months. Tanner still gets up once or twice, but he is pretty consistently in his crib from about 8 pm until 6 am. Naps are still hard to come by. When he sees me in the middle of the night his whole body smiles. I love it...kinda.

I enjoy our alone time. I really miss the big kids when they are at school because they love to play with Tanner, which frees me up slightly, but I love having so much time to play with him, just us two. He absolutely craves attention and eats it up. If I walk away from him for more than a minute, he makes it known that he does NOT approve and the big tears start flowing. I'm a sucker for this cute boy.

He smiles with his entire body, but specifically with his whole face. I can only see his eyes and tell when he is smiling. His face lights up. He is full of personality.

I gave him cereal for the first time at 5 months. You can tell I'm brain dead because I gave him oatmeal instead of rice for two whole weeks before noticing. No wonder he chowed down. By then he wasn't interested in the rice stuff, so now we mix. Oh well; he clearly has no allergy. He loves his food. His mouth stays open except to swallow.

He has little interest in mobility (yet). I wish he'd crawl only so that he has something to do other than be held by me. I have awesome arm muscles and have learned how to make an entire meal and set the table with Tanner in one arm. Part of me doesn't mind...because this is the age where I'd freeze time, after all. 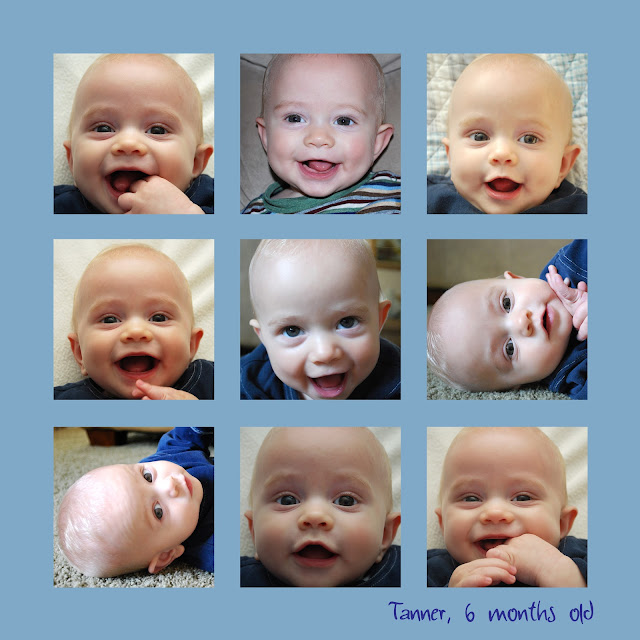 I figure the people that read this blog know me pretty well, and probably know a lot about my family.

Today I figured I'd give you a snapshot of my extended family. Some of you know them too.

What is worth driving way too many hours with a baby who hates not being held, with traffic and fog, and then a barfing 5 year old? These people! We spent the last 4 days together, for the first time in almost exactly two years.

My little brother came home from Australia on Wednesday. After about a day of being together, it was like he'd never left. Except he says some funny words and sometimes you can hear a very slight accent.

Here is my entire family. 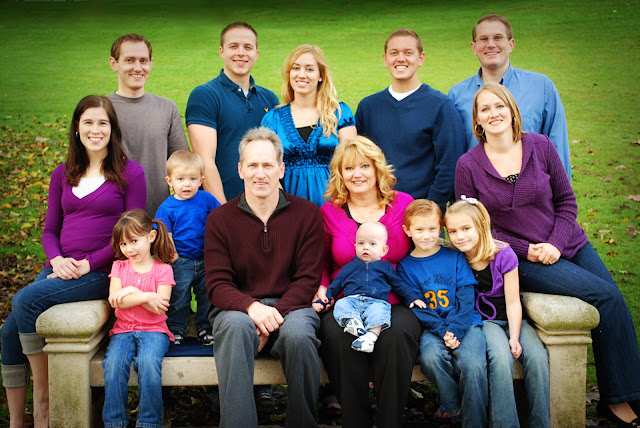 My parents hardly look old enough to have 5 grandkids, right? My dad has a really cool job but even after working with him for two whole summers (8/9 years ago) and him having been there for as long as I can remember, I still don't know what he does. We joke that it's a I could tell you but then I'd have to kill you type of job. Maybe it is. He's busy with that and being a Papa, and being a Stake President, and always having a few house projects going on. He's pretty handy. And he can bowl. And he's athletic. 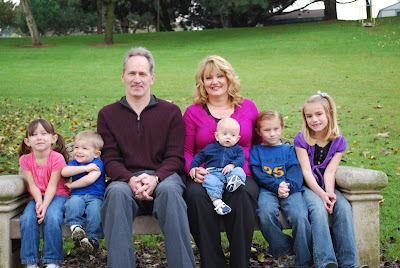 My mom loves reading to her grandkids, and she loves purple and leopard print (and sometimes even purple leopard print). She's trained Emma so perfectly that Emma can spot those animal patterns from a mile away. She works at a dentist office and supplies me with lots of sample-sized Sensodyne. And she can dance. Boy, can she dance.

Michael comes next. He's the oldest (though I got married first). I won't give his age but he's entering a new decade in a few months. He is married to Laura and they have two kids, Jessica and Chandler. Laura's a great mom. Jessica has a song in her heart (and in her mouth) almost constantly. Chandler is a fun little boy and I'm not entirely sure he knows how to get around without running. They live in Idaho - much too far for my kids to be happy with - and I think one or two more winters there will have them crawling back to slightly warmer temperatures. At least we can hope. I must say that in high school I loved having an older brother, with cute friends, who wasn't too embarrassed of me. And being one grade apart was awesome. I highly recommend it.

Then there's me (no picture). 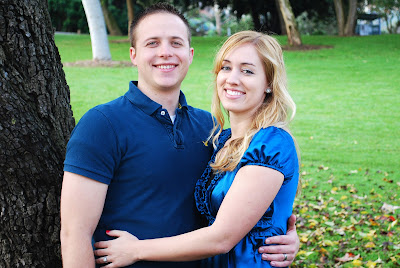 Next, after almost 5 years, came Carly. She's my only sister and I didn't like that we were 5 grades apart. She's the beautiful one some of my friends called "Barbie." Carly married Michael (yes, another Michael in the family) last August and they pretty much had to work around me and my due date to plan their wedding. Michael has been such a fun addition to the family, as he has a great sense of humor and plays with my kids as much as they want. Tyler informed me today that Michael is one of his favorite people. They live in Nashville and I'm hoping to go visit them before they have to leave (they're only there for another year or less). And I'm working on getting them closer to us permanently. 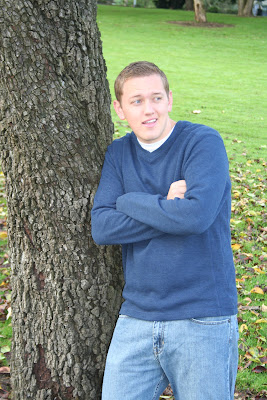 And last is Adam. He is and always has been so much fun. He put up with a lot being the youngest of 4, but the upside of that was that he got fed lollipops quite a bit as a baby. My last three memories of him from before he left consisted of Prop 8, Macie's funeral, and habanero peppers. When I saw him this last week I felt like I was looking at a peer. He is quite a bit taller than me and just looks so mature. He goes to school in Idaho (he will in April). My kids adore him and they broke him in fast by making him play Mario Kart with them. Adam is someone I have come to admire quite a bit these last few years. He made me so proud today in church. A real softie, that wanna-be Aussie.
One of the most fun parts was doing Just Dance 2 on our Wii. That's a good time. Now it's back to work and school and our own beds. It hurts inside that I don't have any idea when we'll all be together again, though I am quite certain it won't be two years.
There you have it - the coolest family ever. And worth all the stress to be there. :)