Instead of making resolutions for 2009, I'm going to do my best to focus on the highlights from the year 2008:

Here's to a happy and even better 2009! This is our Christmas card, for those of you who didn't get one in the mail (due to lack of addresses, etc.). Merry Christmas! 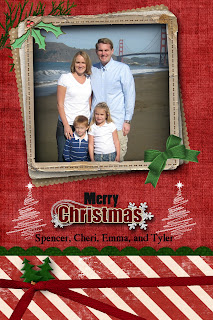 My Beef with the Big Guy

This Santa thing is getting tricky. I didn't anticipate having to be so careful and having to be prepared with explanations (for Emma) this early. Can't she just believe...without questions?

Yesterday, Spencer called me to come down to his office because Santa was going to be there for a couple hours. The kids hadn't visited Santa yet (though they did talk to him on the phone) this Christmas season. Emma took her HUGE picture list of what she wanted. There are cut-out pictures of about 25 different toys glued on this large poster. I humored her and let her drag it over to Santa. They both sat on his lap and showed them what they wanted. Santa went on to give them a speech about how they can't get everything they want but how "whatever you get is exactly what you're supposed to get..." Huh? It was quite the serious talk. They sat there just staring at him. I mean, they're 4 and 3. Doesn't Santa just oblige, tell them to be good, give his ho ho ho, and move on to the next kid? Guess not. Whatever; at least they got to see Santa.

On our drive home, Emma proceeded to say to Tyler, "That wasn't the real Santa. He was just pretending." I asked her what she meant and she reminded me that this summer, she went with Nana and Grandpa to a Christmas in July (or was it June?) party, and the Santa there was the REAL Santa. OK...at least she still believes. I just didn't quite know how to explain the plethora of Santas. I really must go to the mall but the store I need to go into has Santa (another Santa, of course) sitting right outside of it; now I'll avoid it even longer. I don't know how we'll handle the Santa visit next week at pre-school. Because he is definitely another "pretender."

Back to the drive home...Emma said she was getting every single toy that was glued onto her larger-than-life paper. I decided we needed to have a talk. I told her that Santa will bring some really cool stuff, but she wasn't going to get every single thing she wanted. She got so upset, saying that she was good and wanted EVERYTHING. I told her there are kids who get absolutely nothing for Christmas, and that we need to be grateful that we get the toys we do. She burst into tears - I didn't realize I would ruin her day - and then fell asleep for the rest of the drive. The Santa visit was part fun and part disaster (aside from Santa being too serious). Boy, I do love Christmas but it's just getting harder to deal with the details!

*Why is "My Favorite Things" (The Sound of Music) considered a Christmas song? Seriously.

*If you've seen the ridiculous Christmas TV program "Shrek the Halls," there is a part that gets me every time (it's on our DVR) - at the end when the 3 pigs are lying down to go to sleep, under a blanket. One pig says, "We are pigs, pigs in a blanket, yeah?" The others agree, and he says, "So this is funny then, yeah?" Oh, and it is. So funny. Maybe their accents make it funnier...

*Christmas lights are great. Those blow-up Christmas figures that take up an entire yard...not so great.

*It is, once again, freezing here. If you know where we live, you'll feel bad for me when I tell you it's going to drop to 29 degrees the next few nights. Hello heating bill. 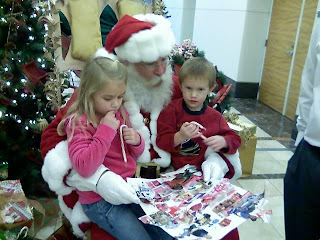 Here is Santa having his serious talk with the kids. Tyler's thinking, "What??" Picture courtesy of my cell phone...

Several days ago we got the bittersweet news that Spencer's granddad had passed away. As much as we were happy that he was again reunited with his sweet wife, I wasn't able to sleep that night. I was (selfishly?) sad as lots of emotions returned to the surface. My kids took the news really well; all they said was, "Granddad's in heaven with Macie!" We had the great honor of taking a quick trip to Salt Lake for the amazing funeral. I loved getting to know him even better by those who knew him the best - his son and his dear friends/colleagues. Everything about it was just wonderful, except for me crying like a baby half the time. 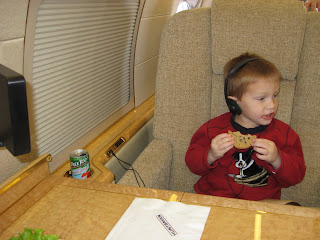 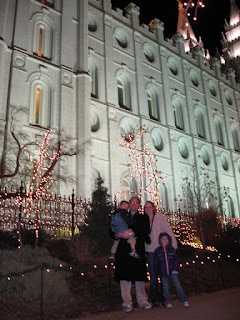 Checking out the lights at Temple Square. Brrr!

We were in Salt Lake this past Easter. I got this picture of the guys and it turns out it's now the most recent 4-generation picture I have. What a treasure. 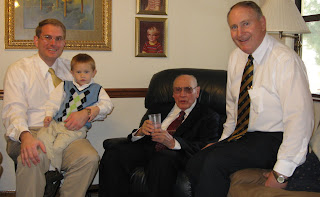 I'd like to share two of my favorite quotes from him. They have really brought me comfort these last six weeks, and I hope someday to be able to tell him this in person: