After Tanner was born, when we were trying to decide if we should have another baby, what finally pushed me to have Sadie was one thing, really. I would picture our family, our future family, and it seemed incomplete. It was crazy and chaotic at the moment, but when I looked ahead 20 years I just knew someone was missing. I wondered if that someone was Macie but ultimately this little glimpse is what made me want that one more.

The image I would see of our future family was always at Christmas. A perfect, cute little Christmas. When I think of Christmases growing up I have such vivid memories. My siblings and I would make a tent with blankets and sheets each Christmas Eve, often spending a large part of the day perfecting it. We would sleep in there, and my older brother and I would try to stay up all night. I think once we did it, by watching some ridiculous black and white movie on TV that was the only option back in the olden days. :) Another memory/tradition was going to the Los Angeles temple on Christmas Eve. Also, on Christmas morning we took turns opening presents. The stockings were always EXPLODING with tons and tons of goodies--scissors and pens and gum being some of my favorites.

I struggle discovering and establishing traditions for my own family. We are working on it. This year my parents and little brother were here for Christmas. Luckily, Adam was a lifesaver and helped the kids build a tent in the boys' room. (We won't talk about which ONE child actually ended up sleeping in there - hint: it wasn't Adam), but it was really cool. I think that might be a tradition that continues on. Christmas morning is always so magical for me, because while the kids are looking around and checking out gifts with stars in their eyes, I am watching their faces trying to soak it all in and remember it forever.

This Christmas we tried to simplify it just a little bit. Which doesn't really work out when you consider all the gifts other people give...but it was fun to watch it all. I just love Christmas. And I can't wait for future Christmases, especially the ones I have pictured in my mind. 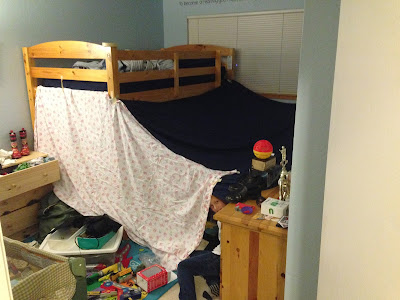 not to be forgotten

How Sadie, when she wants something, gets in my face and nods her head and smiles until I figure out what she wants. (Way way better than screaming, I must say.)
How Christmas magic is alive and well. Watching my kids get soo, so excited about buying a gift for one of their siblings is just the best. (They each happened to draw the name of the person just younger, which works out so perfectly.)
How December is relatively NOT busy. A first, maybe a last, and definitely welcome!
How Sadie is taking 5-6 steps and claps for herself anytime she does it.
How Sadie is sleeping well (relatively speaking, of course). Too bad Tanner isn't!
All the Christmas lights!
That this is one of three months during the year that work is "slow" for Spencer.
Being awake at 1 am is easier when the tree is all lit up. Trying to convince myself... 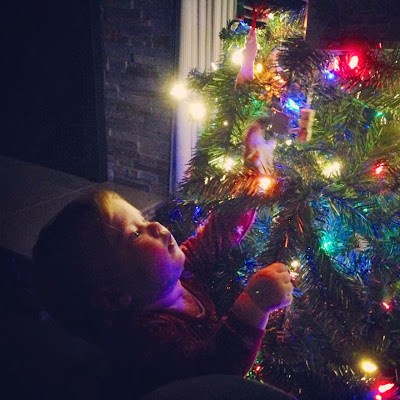 (I am not a huge fan of colored tree lights, I think I have finally decided...)

I remember how the first few years of marriage, all of our "vacations" were to see family. And while that is a great thing, something oh so important, we decided several years ago that our family needed our own "vacations" (I use that word loosely, because WE don't do "vacations"...but anyway...).

We knew months ago that we were going to Las Vegas for Thanksgiving. I still have 4 living grandparents, and it has been years since we have seen them. I want my kids to know how cool it is to have so many great-grandparents; I never had that. But thinking of driving that far with Sadie was giving me anxiety. Spencer's solution was to pile into the motorhome. $$$. Then his adventurous side kicked in and he planned a whole trip and came to me for approval. After a lot of convincing, we were on our way.

Our kids get the whole week of Thanksgiving off, so we pulled them out early the Thursday before and took off. Our goal was to get to Barstow to sleep in a Flying J parking lot (the only FREE part of this entire trip). We made it and it wasn't too bad. We celebrated our anniversary the next morning by eating at Denny's. We lead a glamorous life, I'm telling you. 11 years baby. 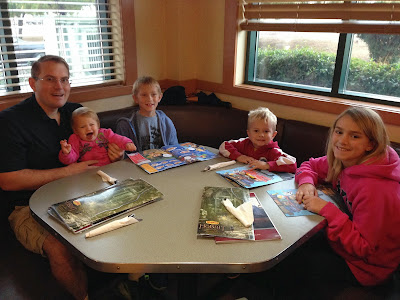 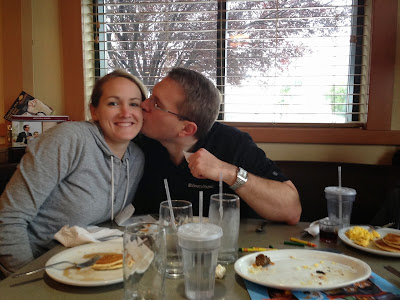 Then we were off to Williams, AZ. Unfortunately we were headed to a few days of bad weather. Fortunately, we were prepared because we were watching weather like crazy people. We made it to Williams with enough time to swim in the hotel/RV park's pool/hot tub and then it was time to tell the kids the surprise we had been teasing them with. Spencer had booked tickets to go on the Grand Canyon Railway's Polar Express train. The boys were especially excited. And what better way to spend our anniversary? 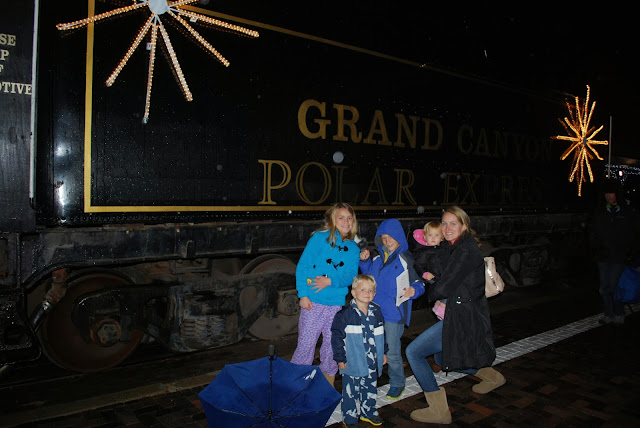 I'm telling you, this was really cool. The "waiters" were dressed like the ones in the movie, they served hot chocolate and cookies (some of the best cookies I have tasted, actually), they read us the book, and we went to the North Pole where we could see Santa waving to us. Santa boarded the back of the train and made his way up to our car. We were in the first car so we had to sing Christmas carols for a LOOONG time. I was frustrated with a baby who was being horrible, but when Santa walked in and my kids got to talk to him for a minute it was just magical. They each got a bell. I thought Tanner had died and gone to heaven. 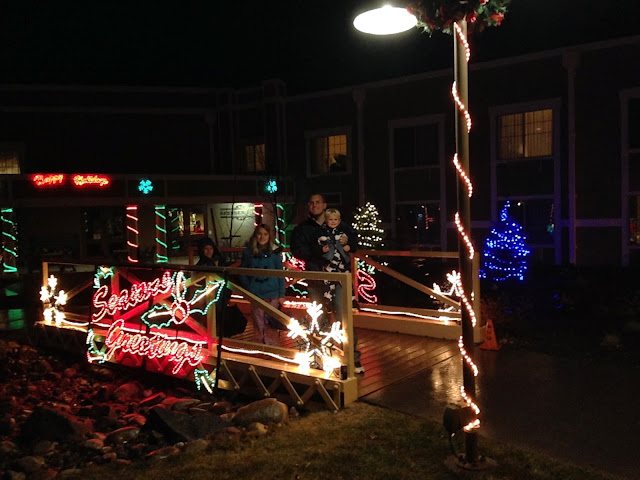 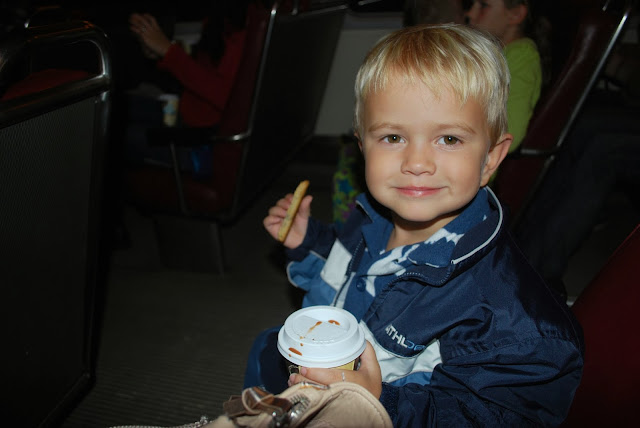 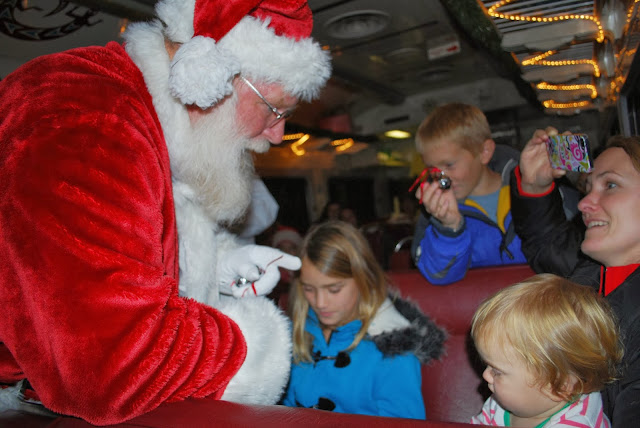 We walked back to the motorhome in the light rain, sad we couldn't explore the town of Williams because it looked really cool. We made plans to come back a few days later.

The next morning it was snowing quite a bit. We checked the radar and saw a gap so we packed up real fast and took off on the hour drive into the Grand Canyon. Right as we got there it started snowing again, and there was quite a bit of snow on the ground already. The trailer campground where we were staying was pretty empty (imagine that). After getting set up we decided to go out and freeze. And freeze we did! The canyon was so foggy that we couldn't really see anything, but we did happen upon elk all over the place. 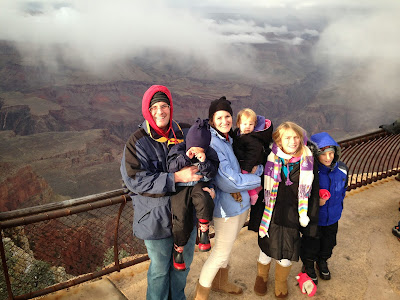 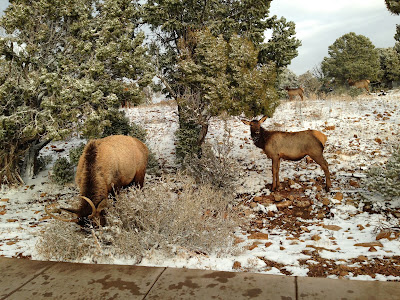 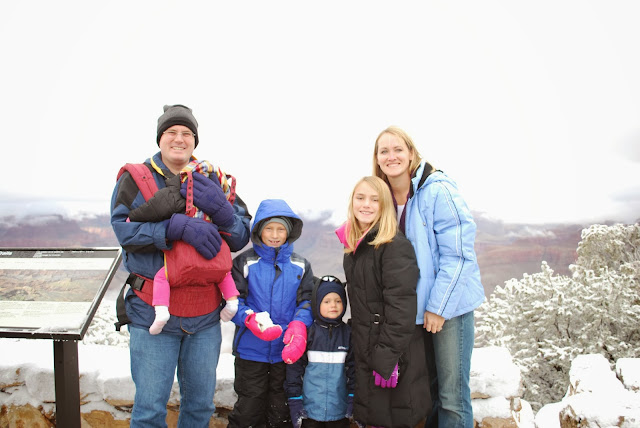 It snowed so much that night. Being Sunday, we found out about the Grand Canyon branch and went to church. And low and behold, when we came out from church the sun was out! We decided to drive around a little and I am so glad - it was gorgeous out! The Grand Canyon is amazing and beautiful. Other than Sadie crying a lot of the whole time, it was really fun. I can tell you one thing the federal government does RIGHT - national parks. This was our second national park this year (4th overall. i think). 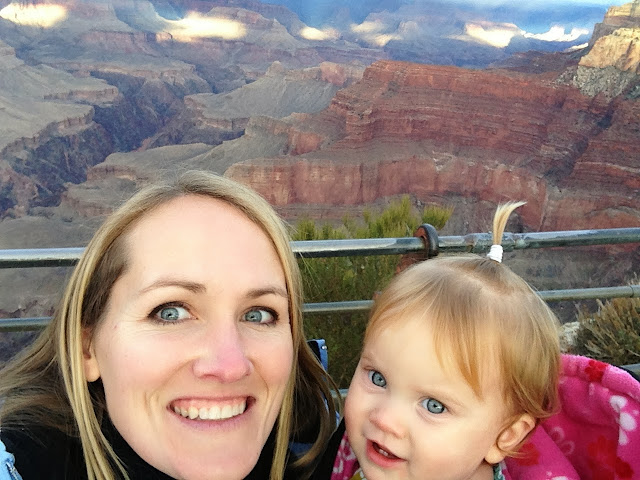 The kids also finished their junior ranger stuff and got sworn in after the ranger told them all about California condors (there are 73 in the Grand Canyon). 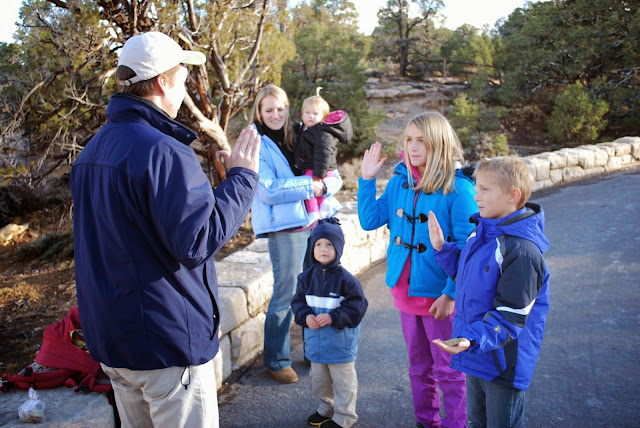 We had one more day, and it was gorgeous. We hiked (not far - too scary with little kids) and went to more look-outs. Spencer also took the big kids to see the movie at the visitor's center. 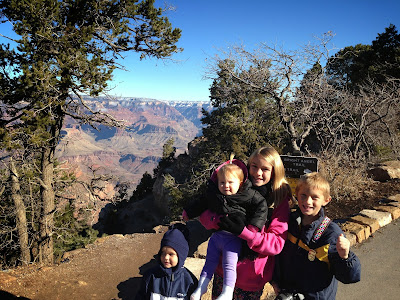 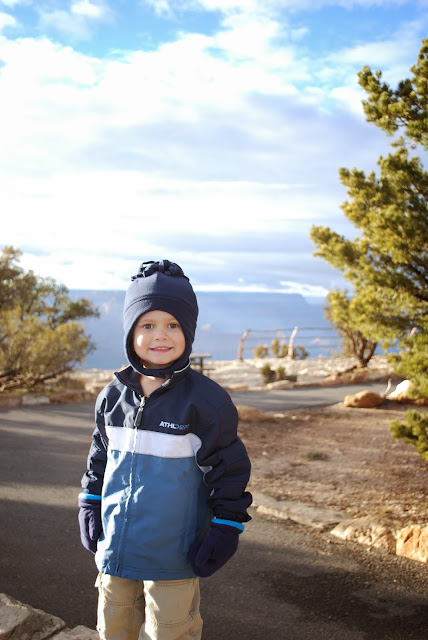 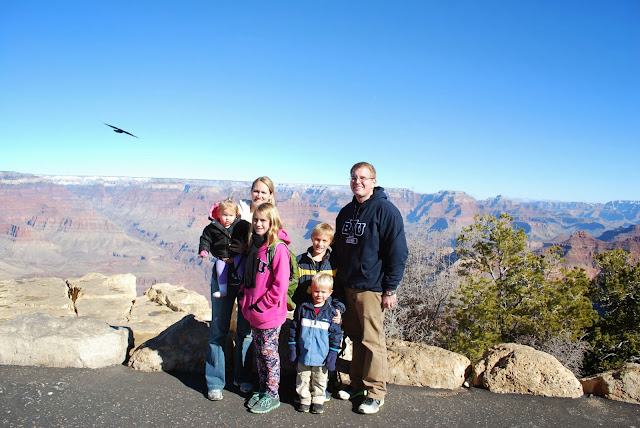 By the end, I was grateful for kids who sometimes sleep well, hot showers, and good food. 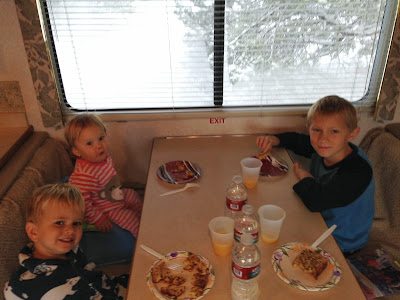 On our way to Las Vegas for Thanksgiving we stopped in Williams and walked around. Cutest town! I am pretty sure (and so are many others) that it was the inspiration for Radiator Springs. Tanner agrees with me. Williams was the last town to be bypassed by I-40. 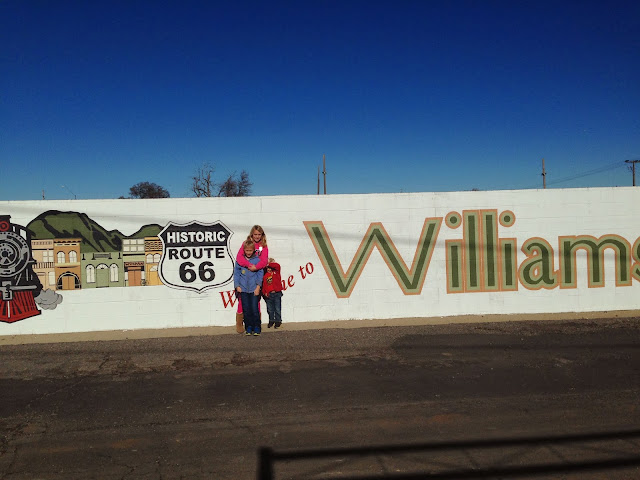 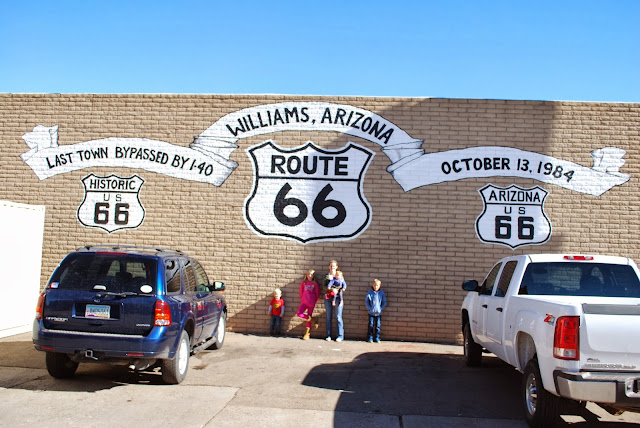 Then it was on to Hoover Dam. Spencer has FOREVER wanted to take the dam tour. I finally obliged and almost DIED a slow death of boredom but he was happy. The new bridge is pretty cool too. 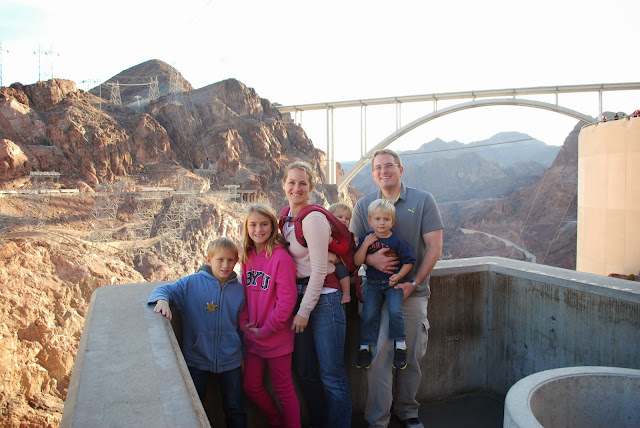 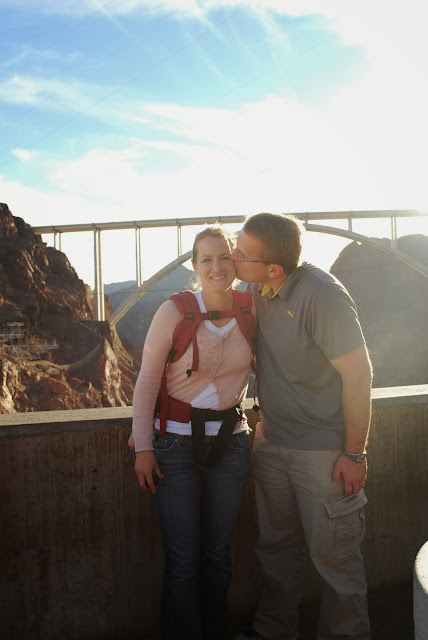 I was so happy to have 6 of us out of 250 square feet (motorhome) and into real beds in my grandma's house. More to come...