there's a first time for everything

I feel quite seasoned when it comes to surgeries; I've had four of them up until this point in my life. My husband, on the other hand, had his very first today.

Several months ago the inside of his middle finger started hurting. Catching footballs, shoveling, and things like that caused him pain. Doing most other things didn't bother him. But it's grown - this mass - and we realized we should get it taken care of before our healthcare system goes completely down the toilet. And, before the end of the year. :)

As if he wasn't nervous enough about being put under and cut into, we got to the surgery center today to see that they had the wrong finger down for surgery! I found it all quite humorous, more than Spencer found it. They took him back to prep him and just as I was mulling over leaving to hit the mall and then coming back before they knew what had happened to me, the nurse came to get me. I was expecting him to be a little loopy and out of sorts but he was awake and totally alert.

I'm not much of a compassionate soul but he'll need me to be for exactly 48 hours and then he should be good as new. In the meantime he has this cool foam block to keep his arm above his heart. I hope he can sleep with that thing. 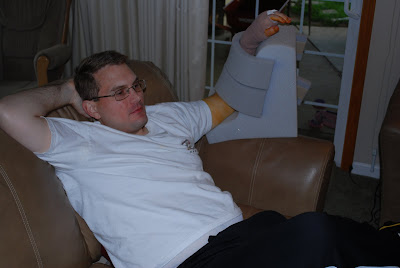 Other than that, Christmas was wonderful as usual. I am really soaking in my kids (BOTH of them) still finding every aspect of the holiday perfectly magical. I know that will only last another year or two so it is still magical for me too. For the first time since I can remember, two traditions in my family came to a halt, but will surely resume one day. I must say, it was kind of nice! I did catch a cold on Christmas day. I'm glad all the hype is over, and am happy with the thought of a new start and, hopefully, a much slower paced January.

a few of my favorite things

(I still don't get why that is considered a Christmas song...)

I thought I'd showcase some of my favorite things from the last month or two. First, our neighbors gave us a little shelf. It was plain and unfinished but well made and Tyler needed just the thing in his room. Here it is. 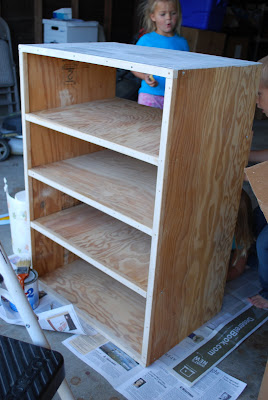 Well, I had to spiff it up a little and I'm always up for a craft so I used paint, paper, and mod podge - you know, the essentials - and came up with this. I added some banana-leaf containers for toys and it's just perfect. Can't beat free! (I know it's kinda hard to see, but use your imaginations... the paint is brown and the paper is blue with brown stars.) 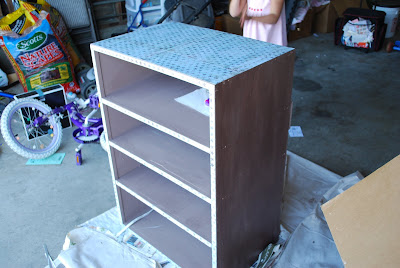 After getting all your input on a color for our door...6 months ago, we finally got that done. And sticking to our previous theme of "hiring out," we had a friend's painter come and paint it for us. It took 2 days but looks incredible. We are thrilled with how it turned out. It almost looks too nice for our house. (Picture is a little cloudy.) 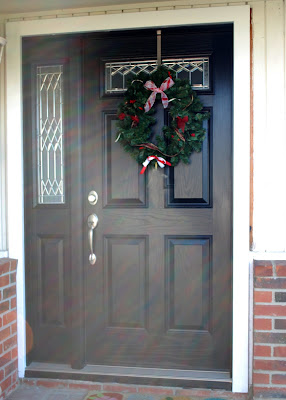 My aunt makes these cute beaded watch bracelets. As is natural for me, I have to discover how to do all things "cute" myself. So, I did. We did an Enrichment night making them and I have lots of extras that I can use as gifts or use for myself. In fact, I think I'll do a giveaway sometime soon (like, in the next week) so be sure to check back. Does that sound fun? 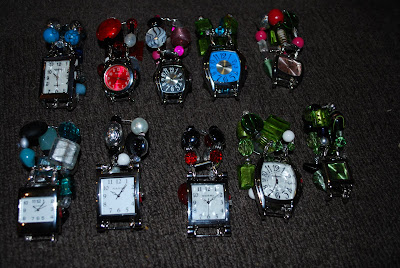 Lastly, I decided to do a "cookie swap" at my house this year. I feel like December is CRAZY (and if you saw my schedule for this week you would be as tired as me) every year but I think it's a great idea to have an excuse for a girls' night out. And, what husband would object to his wife making cookies, leaving for an hour, and then bringing home tons of different kinds?! Win-win if you ask me. Yum. We had about 30 people, tons of different cookies, and lots of fun. No pictures though.

Now I can relax a little. I love Christmastime!

Here I go again, being all cliche-ish, but this really was such a fun vacation for us...and I don't think I have been told off so many times in a two-day period. Last year when we went to Disneyland it was an unexpected quick thing and I was 7 1/2 months pregnant which equalled not much fun for me. This time was quite different.

We decided to line up our trip with Spencer's birthday AND with Veteran's Day so Emma only missed 2 days of school and Tyler only missed 1. And Spencer got in for free one day. I have never gone to Disneyland for more than one day - we usually rush and squeeze it all in, exhausted and all, because 1) it's expensive and 2) I'm usually too tired to even want to go again. But we had some serious Disney gift cards we had to use up, so two full days it was. It made me tired even thinking about it.
Day 1 turned out to be one of their lowest attendance days. We knew this because they were filming ABC's Christmas Day parade as we walked down Main Street (don't feel bad for those teeny bopper singers for having to work on Christmas Day - they don't work on Christmas Day). We saw Ryan Seacrest and didn't hang around for Demi Lovato. Instead, we hopped onto Nemo and got that out of the way.
I'm convinced that Disneyland is a magical place. But I've come to realize that what is really magical is when you have no babies, no diapers, no nappers and your kids are over 40" tall. We ditched our stroller (we only even had a stroller to carry junk around) so many times to all go on rides together, and that was way more fun than any other time we've gone. We took the kids on Space Mountain - I haven't been on that one since high school. I don't remember much about it because Tyler was next to me bawling his eyes out and I was trying to comfort him the whole time. The ride picture is awesome. He was pretty mad at me afterward. 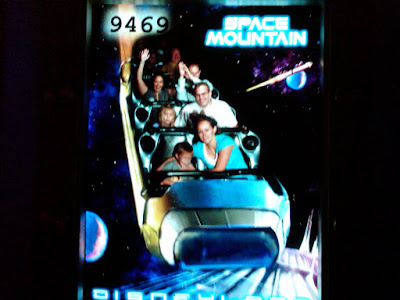 Some of our friends from home were there too and it was fun to run into them and go on a few rides. The lines were the shortest I've ever seen them so we went on 3 rides in the first hour. (It doesn't ever happen that way.) Then we headed over to California Adventure. I really wanted to go on Tower of Terror (I had never been.) So, I was honest when Emma asked me if it was scary and told her I didn't know. Holy cow, I got chewed out by my 5-year old when that ride was over. You should have seen her shaking her finger at me, telling me I had "lied" to her. I told her I didn't realize it was going to be that scary. Boy, that one took my breath (and stomach) away a FEW times... Some spectators even pulled up a chair and watched me get chewed out. She was mad for a few hours. Even now she'll say, "Why do they tell you to say goodbye to your old self??!! What does that mean??" 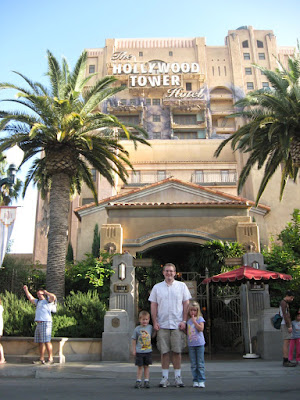 We got to meet up with my very best friend from high school. She and her husband have a cute baby who kept Emma entertained during dinner and the Pixar parade.
The next day was the big birthday! Spencer got a button he was so incredibly proud to wear (ha), and we took the day pretty easy. I did make the kids go on Splash Mountain, and once again they weren't happy with me. But it was totally worth it. (I say that now, but I don't know if they'll ever trust me again.) We let the kids repeat the rides they really liked from the day before, and I even stood in line outside Pixie Hollow for a whole hour (!!) so Emma could meet Tinkerbell. The boys went on Buzz Lightyear and Star Tours two times each while they waited. 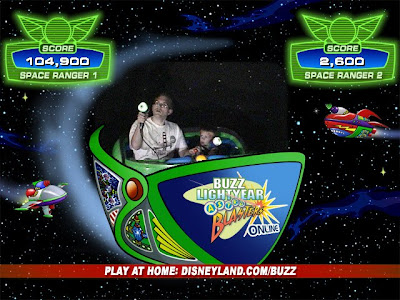 Jedi Training was the only frustrating part of the day... our kids weren't picked by the Jedi Master so there were tears, and then we had to go back for the next showing to try again. Spencer learned quickly that he had to act crazy to help them get picked so he did a good job jumping around and making a scene, and he didn't let them down again (though I did move away so as not to suffer the embarrassment). What a good dad. I was missing my nice camera with a great zoom at this point. 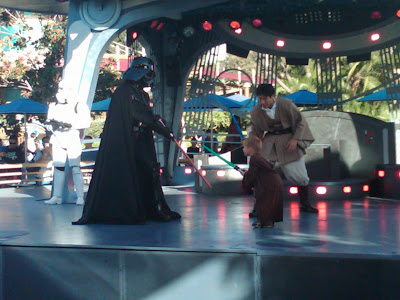 We went home at 4:30 so we could have Spencer's birthday party, complete with that massive Costco chocolate cake. Quite possibly 10 pounds. Yumm.
We had to drive home the next day so Spencer could fly to Utah for work and so Emma could go back to school. I have decided the best time to go to Disney is between Halloween and when they start the Christmas stuff (2 week window). We loved it and went on all the rides we wanted to, usually more than once. I think Tyler rode Astro Blasters (Buzz Lightyear) 5 times.

And there's our trip. Fun stuff. 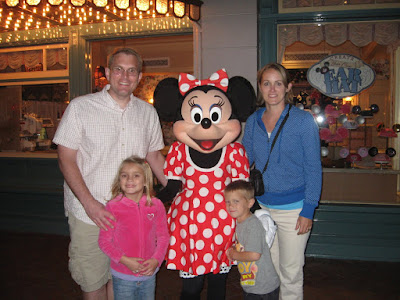 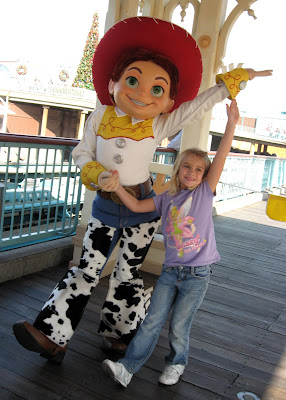