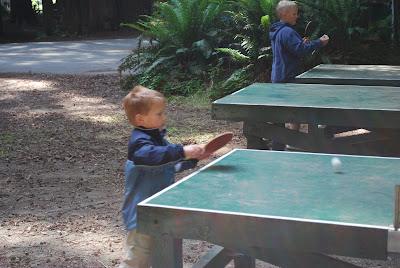 Emma had a weekend of firsts. She had her first kiss - a banana slug - and when I asked her in disgust why she did that, she said, "They told me to." I didn't realize the whole jump off a cliff talk had to come so soon. 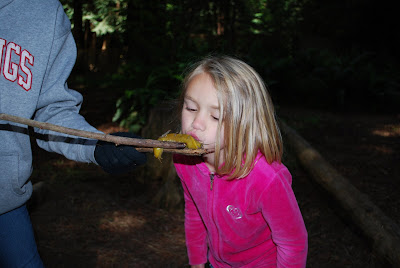 She also hit someone for the first time this weekend. As we saw her holding a boy in a headlock, pounding him, we screamed and ran to save that poor little boy. She went promptly to bed (though we had to laugh at how silly that boy might feel at being beat by a girl) and we later discovered that snotty kid had punched Tyler. Yeah, I would have pounded the kid too. She also wore her first wetsuit and looked pretty cute if I do say so myself. 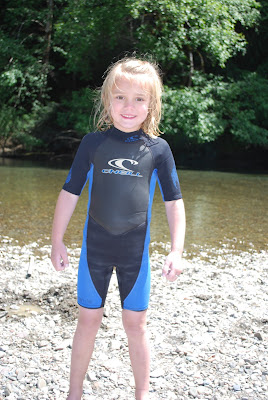 Spencer and I had a weekend full of fighting against nature. There is nothing like having raccoons come after you {ok, slight exaggeration} and not leave you alone. There is nothing funnier than watching your husband chase them up tree after tree, then throw {and miss} rocks at them in the pitch black. There is nothing sillier than hearing him making "scary" sounds to try to freak them out. My throat hurts from laughing so hard. We also had bluejays. Oh, did we have bluejays. One even landed on Spencer's head. Every morning at 5 a.m. the other birds would start making crazy noises. Real fun.
Oh, to be the first campers of the season - all alone - in the campground... I think I prefer crowds.
Here is our trip in numbers:
2 - how many banana slugs Emma kissed (ok, she only kissed one and pretended to kiss another).
31 - how many bug bites we had between the four of us. Not too bad...until you realize that Tyler had 19 of them. All on his face.
3,000 - the minimum number of mosquitos we saw
2 (maybe 3?) - raccoons who teased Spencer
3 - nights we we camped. And froze.
89 - rocks thrown into the river.
12 - how many times Spencer took the kids down the river in our raft.
6 - meals I didn't have to cook! Spencer took care of all of it and it was wonderful. 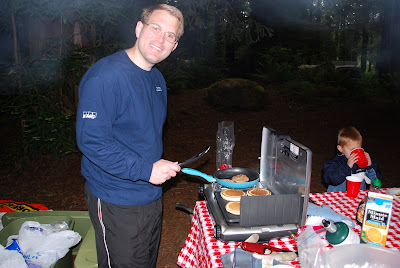 124 - Emails I came home to. Come on people!
76 - new blog posts to read. My google reader is tired. So are my eyes.
134 - pictures I took. About 10 of them are actually good.
6 - loads of laundry, all of which still smells like the campfire.
4 - "cool" rocks that ended up going through the laundry cycle, making lots of noise in the dryer.
11- hours we slept last night, home in our own beds.
Mostly, it was good to get away from our house for a few days and be with some of our best friends. It's all about making memories...gotta keep telling myself that.

...an acquaintance asking me if I was too old to have any more kids?! Ouch!
(however, I was too embarrassed to say how young I actually am. I can't win!)

...stores having drastically different sizing, to the point where I actually fit into a size 4 of one brand at Target, then had to go up to a size 10 in another brand?! Build me up, then tear me down! (When I was 19 I worked at one store in the mall for two months where they purposely sized their clothing to make people feel skinny and good about themselves. There, I wore a size 0 - uh, pretty sure I've NEVER been a size 0 - and their marketing strategy paid off. I loved it!) *Can you guess which store this was?

...wild and crazy weather? 96 degrees two days in a row, and then 65 degrees, and then hot again? Gotta love SPRING. (Or global warming, right?)

...all the daylight? Man oh man, I LOVE daylight but it's completely throwing me off about now. Is it really getting light in the 4 am hour? Then suddenly it's 5 pm and I'm scrambling to decide what to make for dinner, thinking it's 3:00. Oh how I love summer.

Seriously, by dinnertime some days I want to take my plate and go eat somewhere else, somewhere quiet. I've heard all my life how important it is to eat dinner together as a family. This topic seems to be around, and in my mind, more these days. Spencer typically isn't home in time for dinner, and I'd rather not have the kids eating at 7 every night. So, it's the 3 of us. Sometimes I still take my plate elsewhere when I have had it.

I know it's important to eat dinner together; I've always heard it and I've always known it. But the pediatrician has also started pointing out to me the importance of family dinners. She doesn't have the same background I do, but I find it fascinating that she would talk to me about this. (This is the same doctor who called me at night after our appointment in February - Emma's - to tell me her urine test was fine...and then to tell me how she sorry she was that I had lost a baby. I didn't even know she knew I had been pregnant; I guess they have their ways!) She said studies show that children who participate in family dinners have lower incidences of obesity and higher chances of going to college, among other benefits. Anyway, I admire her quite a bit and figured that if someone outside of my family and church was telling me to have family dinners I should really not just do it but make it a priority.

Well, dinner is over, and the kids are chasing each other and screaming. And I am satisfied. We had a good discussion - just the three of us - over pizza and noodles, about camping and school and how Aunt Carly was hit by a car when she was little, and more seriously, about death. Emma asked if one of her children would die as a baby. How glad I was for that teaching moment! Then they asked why they couldn't sleep in the tent tonight outside. Little brains are not only so pushy and sneaky but so creative! I actually enjoyed sitting in our little breakfast nook together chatting for an undisturbed 15 minutes. I am seeing the importance in it, not just blindly following. Spencer makes it home for 1 or 2 of the weeknights and those nights are even better because I get to see my kids tell Spencer about every exciting bug they saw and picture they drew. Oh to see life through a child's eyes again!

I am determined to be more active in making sure we eat dinner together, and making it enjoyable with productive conversation. I have a sneaking suspicion that this tradition will become more important in the future as the kids grow up and have to stand up for themselves and avoid negative peer pressure. I hope that our family as a whole can be a safe, welcoming place for them every evening to talk and ask questions. Besides, it's fun and I love to talk! 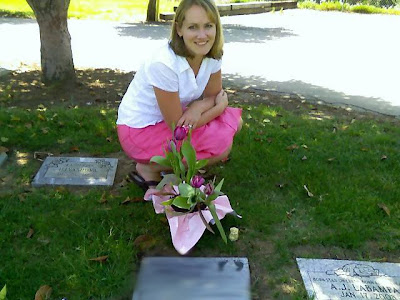 And to my wonderful mom, thanks for being a great mom and a fabulous grandma, to all 3 of my kids.

When I was growing up my parents remodeled our house. Twice. The second remodel was extra significant and took them years; my parents did it themselves in their "spare time."

I was basically useless in terms of the remodel. In fact, I can't think of one single thing I contributed. Oh wait - I can remember one thing. I swept up all the nails and dirt once. Maybe more than once? Pitiful. In my defense, I was a senior in high school...need I say more? (Dad, tell me you can think of at least one more thing please!)

I've done some work in our new house, mostly painting and decorating. Girl stuff. Most of the work has been done by Spencer. But this time, I'm contributing by taking pictures to document it. That's something, right? Granted, it doesn't need much, mostly just some TLC. 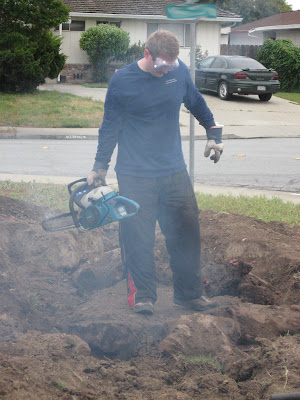 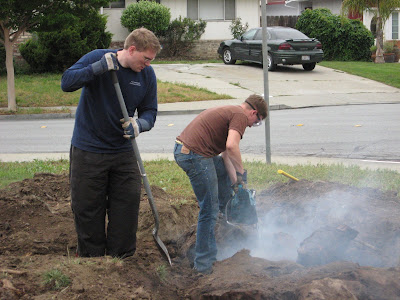 But alas, I think we got in over our heads just slightly. Here's Spencer and our lifesaver/helper Kevin chain-sawing the roots of the tree from our front yard. Check out all that smoke! I don't know what kind of tree this was but gosh golly, it must have been a beast! The genius who had the house before us removed the tree. Well, he removed the part above ground. The small part. And now I feel like we're either living in the movie "Holes" or near a bomb site. The roots take up a third of our (large) lawn. And if we want grass to grow in that spot, they've gotta come out. I'm thinking the word stumpgrinder will soon be part of our vocabulary.
I guess the good news is that Spencer got to feel like a man and use a chainsaw for an entire 4 hours. And, we have firewood for life! Homeownership is great! And me? I'm happy to watch and take pictures. And sweep, if needed. Some things never change. (Seriously, doesn't he look so manly holding that chainsaw?)